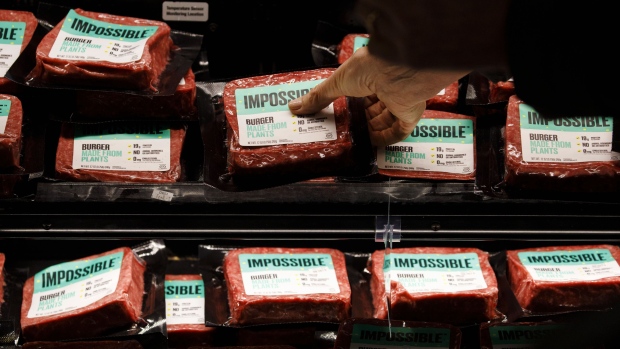 Impossible Foods Inc. has applied to start selling its plant-based burgers in the European Union as it looks to expand outside the U.S. and Asia.

The maker of the Impossible Burger filed an application to market soy leghemoglobin, the iron-containing molecule made with a genetically-engineered yeast, according to the EU’s food safety authority. The ingredient, known as heme, is a key additive for helping replicate the richness of meat flavours.

Genetically-modified foods and labelling are tightly regulated in the EU, unlike the U.S., which could mean approval could take time. If it gets the green light, the Impossible Burger will join an increasingly crowded market for faux meat in Europe. Beyond Burger has already made inroads in supermarkets on this side of the Atlantic, and is featured at racing-driver Lewis Hamilton’s new plant-based burger chain.

Nestle SA, the world’s biggest food company, has also just accelerated efforts to tap demand for faux meat. The Swiss firm recently rolled out a plant-based burger in the U.S., but had previously been focusing on its Garden Gourmet vegetarian products, including the Incredible Burger, in Europe.

Demand has boomed as consumers seek out foods they see as healthier and more environmentally friendly than beef. Imitation meat could reach nine per cent of the estimated US$2.7 trillion global meat market by 2040, Jefferies analyst Simon Powell forecasts, from less than one per cent now.

The EU application from Impossible Foods was filed Sept. 30 with the Dutch government under the EU’s regulation on genetically modified food and feed, and passed onto the European Food Safety Authority, filings show.

--With assistance from Corinne Gretler.