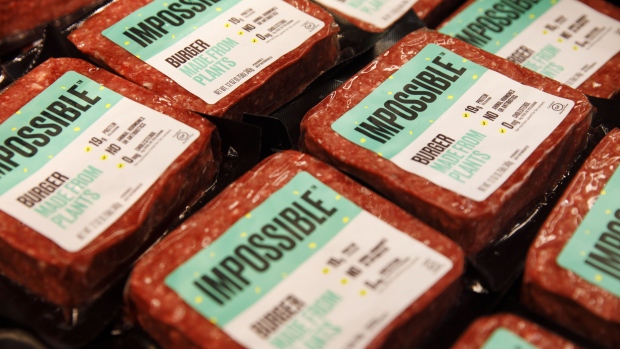 Packages of Impossible Burger plant based meat are displayed for sale during the Impossible Foods Inc. grocery store product launch in Los Angeles, California, U.S., on Friday, Sept. 20, 2019. The Impossible Burger made its retail debut at 27 Gelson's Markets locations in Southern California before expanding its retail presence in the fourth quarter and in early 2020, the company said in a statement. Photographer: Patrick T. Fallon/Bloomberg , Bloomberg

(Bloomberg) -- Impossible Foods Inc. is reorganizing its structure under new Chief Executive Officer Peter McGuinness, dismissing about 6% of its 800-person workforce as the maker of plant-based meats tries to position itself for faster growth.

In a Thursday memo to employees seen by Bloomberg, McGuinness said the reorganization in the works for the past two months has “created clear supply-and-demand functions” and is focused on research and development, without providing more details.

“And we’ve made the very difficult decision to eliminate certain roles that have become redundant to others in the organization or that are no longer aligned with our core business priorities,” McGuinness said. Affected workers were to be notified Thursday.

The memo detailed benefits to the severed employees, including at least 12 weeks of salary plus an additional week for each year of tenure at Impossible. They’ll also receive a one-year extension for exercising stock options at the company, which is still closely held.

“As we continue to scale, we’ll hire strategically to build new muscles and capabilities that will further accelerate our growth,” McGuinness said in the memo.

McGuinness joined Impossible as CEO in April from yogurt maker Chobani Inc., where he had been chief operating officer. That experience could help Impossible’s efforts to expand its supermarket presence.

While Impossible has said it’s experiencing sales growth, the buzz around much of the plant-based meat sector has cooled recently -- in part due to the higher cost versus regular meat as consumers grapple with the highest inflation in decades. Sales for the category have started to decline, according to data from Information Resources Inc., or IRI. Deloitte Consulting has said slowing sales may be the result of market saturation. Beyond Meat Inc. in particular has struggled in recent quarters.

In an interview with Bloomberg Television in September, McGuinness said the company is working to add new points of distribution with restaurants and retailers. Consumers still have “low awareness” and “low understanding” about plant-based foods, he added.

“The category in and of itself has done a pretty lousy job of communicating it, and we haven’t done a great job either,” McGuinness said.