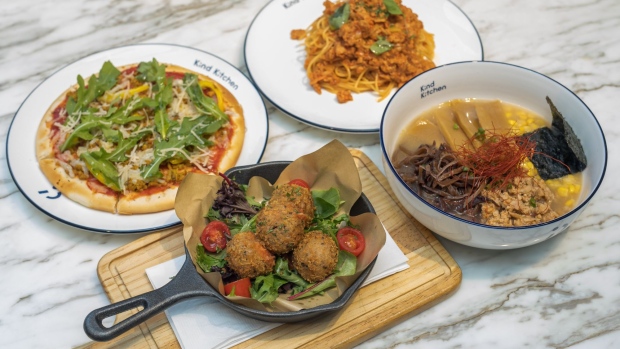 Dishes made with plant-based omnipork are arranged for a photograph at the Kind Kitchen restaurant, operated by Green Monday, in Hong Kong, China, on Thursday, June 20, 2019. After its success distributing Beyond Meat Inc.'s mock beef patties in Asia, start-up Green Monday has a new food , Bloomberg

Impossible pork will debut at celebrity chef David Chang’s Momofuku Ssäm Bar in New York on Thursday, and restaurants across the U.S. and Hong Kong will be able to order it from food distributors. The product will be available in more than 120 restaurants in Hong Kong in early October, and enter Singaporean eateries the following month, with a focus on those serving regional cuisine, which is traditionally heavy on pork, the company said.

“People who prefer Asian cuisine are absolutely the consumers who are going to migrate to this product,” Impossible President Dennis Woodside told Bloomberg News in an interview.

The rollout comes less than a month after the Redwood City, California-based company started selling faux-chicken nuggets, expanding from its core line of burger patties and sausages. The acceleration of product development at Impossible underscores the fierce competition between food companies as they try to corner the growing market for imitation meat.

Still, in its quest to win over Asia, Impossible faces a significant hurdle: a lack of access to consumers in mainland China, where roughly half the pork eaten worldwide is consumed. Global rival Beyond Meat Inc. started selling its faux-pork in China in November, while Chinese startup Zhenmeat started offering it in mid-2020 and Hong Kong’s Green Monday was hawking its OmniPork even before Covid-19. But China’s government hasn’t allowed Impossible to enter the market as the majority of its products use heme -- an ingredient made from genetically-modified yeast -- which requires regulatory approval.

Woodside said there were “no updates” yet on whether its pork would be approved by Chinese authorities, saying Impossible wanted to build a production center in the mainland if it was allowed in.

Impossible aims to bring its prices down to closer to that of real meat by scaling up production capacity, Woodside said.

Its U.S. production “has increased by about 14 times in the last 30 months or so,” he said. “As our business grows, we have to constantly be about evaluating new ways of scaling production, whether that’s in the U.S. or overseas.”

Impossible eventually wants to sell packaged pork in grocery stores for cooking at home, he added, and it will be available in ready-to-eat meals in some Hong Kong supermarkets from October.