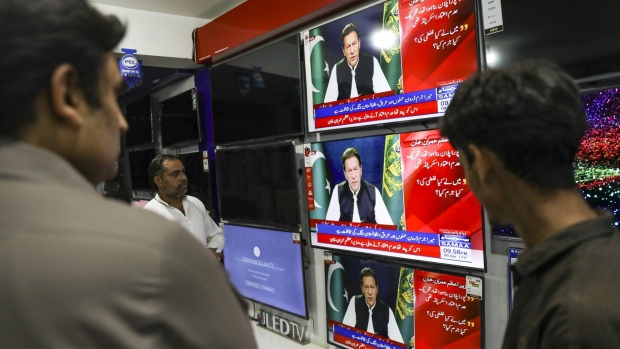 (Bloomberg) -- An ally of former Pakistan premier Imran Khan was arrested and a TV channel seen to be close to his party has been pulled off air for allegedly broadcasting “seditious” content against the South Asian country’s powerful army.

Pakistan’s political risks have remained elevated since Khan was ousted in April through a parliament no-confidence vote. The former leader has continued to accuse Prime Minister Shehbaz Sharif and the Pakistani military of conspiring with the US to remove him from power -- an allegation all three have denied.

Shahbaz Gill from Khan’s Pakistan Tehreek-e-Insaf was arrested on charges of sedition, based on comments he made on the local ARY channel, that were part of a plan, Interior Minister Rana Sanaullah said in a news briefing.

The latest episode adds to Khan’s worries after the country’s election commission earlier this month ruled that his party received illegal funding from overseas. Prime Minister Sharif’s administration has said it will start legal proceedings looking to ban the PTI from politics.

Imran Khan took to Twitter to call the incident shameful and alleged that the manner in which Gill was arrested was like an abduction. If found guilty of sedition, Gill could face the death penalty.

Gill, who is Khan’s chief of staff, appeared on local station ARY News on Monday and urged army troops not to accept any illegal order from the top military leadership, the Associated Press reported.

ARY News, a known critic of the current government, had been taken off air and its head of news was arrested in Karachi. The media outlet is now streaming content through its website and has accused the government of victimization.

Spokespersons for the government and Khan’s party were not immediately available to comment on the events.