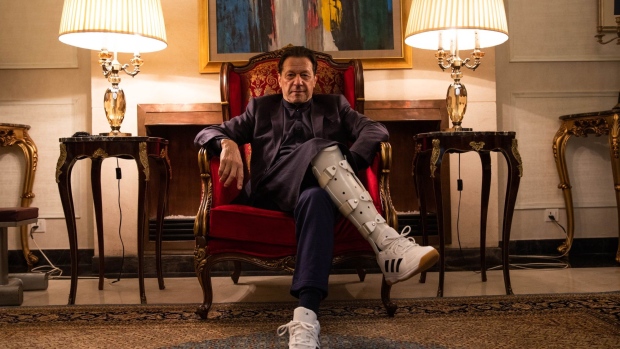 (Bloomberg) -- Pakistan’s ousted Prime Minister Imran Khan said he’s confident of returning to power this year, and would back a continued role for the International Monetary Fund to prop up the economy and stave off a growing risk of a debt default.

The former cricket star, who was removed from office in a confidence vote last year, said in an interview that he expects to win a majority when elections are held — likely sometime after August. Khan and his party had a mixed showing in recent by-elections and local polls, and he would face an uphill task with a national vote where the winner will need the support of the powerful military establishment to take power.

Khan said he’s preparing a “radical” plan to shore up an economy that he predicts will be in even worse shape by then.

“If we get into power, we won’t have much time,” the 70-year-old politician said at his residence in Lahore in Punjab province, where he’s recovering from a leg injury sustained when he was shot at a protest in November. Asked if his plan would involve sticking with the IMF — whose accord for about $6.5 billion of lending to Pakistan has seen multiple delays — he said: “We have no choice now.”

The South Asian nation slid dangerously close to a debt default in recent months, driving its bond yields to distressed levels, as IMF loan payments were held up. Khan’s successor, Prime Minister Shehbaz Sharif, has been wary of the fund’s demands, like raising energy prices and taxes. Pakistan’s foreign-exchange reserves have slumped by half since October, and they’re now insufficient to pay for one month’s imports.

The country is also still reeling from the impact catastrophic flooding last year, and suffering from surging inflation.

“We will have to make policies like never before in our country,” Khan said. “We fear a Sri Lanka-type situation,” he said, referring to the default in Pakistan’s regional neighbor.

He said he would reappoint Shaukat Tarin as finance minister, after he held the post in the previous Khan administration.

Khan has taken to the streets since he was pushed out of office, leading protests aimed at pushing Sharif’s government to call early elections.

In one of his government’s last major decisions, Khan lowered fuel prices — triggering a dispute that stalled the IMF program. The ex-premier said his decision was based on getting discounted fuel from Russia. Khan was in Moscow for a previously scheduled visit on the day Russia invaded Ukraine in February last year. In a three-hour conversation, President Vladimir Putin vowed to help Pakistan with energy supplies, Khan said in the interview.

He said he’ll pursue an independent foreign policy that doesn’t lean on any single country such as the US or China. He gave the example of arch-rival India, which has amicable relations with the US but still imports discounted oil from Russia and trades with China.

Khan said he enjoyed an excellent relationship with former President Donald Trump, but ties deteriorated under his successor. “It’s only when Joe Biden came along that for some reason I found that there was reluctance there,” he said, adding that he believes that happened because the US needed someone to blame for its exit from Afghanistan.

Khan came to power in 2018 as an outsider in a country where politics has been largely dominated by dynasties and the powerful army. While his rise to the premiership was seen as having the blessing of the military establishment, his exit was marked by a breakdown of that relationship.

In his latest pressure tactic to push for snap polls, the former cricket star’s allies dissolved two of the nation’s four provincial assemblies. That has triggered elections in those provinces, which historically have been held in parallel with a nationwide vote.

Khan said he believes national elections may be rigged to keep him out of power. He referred to his removal from office as “regime-change,” and said that Sharif’s governing coalition and some members of the country’s establishment are “scared” because “they were part of the regime-change. We know exactly who was responsible for it.”

Pakistan’s government spokesman and the army’s media wing didn’t immediately respond to a request for comment on Khan’s remarks.

Khan, who has heavy security outside his residence, said he still believes his life is in danger. He has blamed Prime Minister Sharif and an intelligence officer for the November attack. Both have denied the claim.

“Right now I’m afraid, I have powerful enemies,” said Khan. “The entire political status quo is against me.”

Khan’s Pakistan Tehreek-e-Insaf party said early Wednesday that there were reports circulating that the former premier could get arrested. News reports said a senior party leader Fawad Chaudhry had been detained by security officials. The police complaint accused of Chaudhry of threatening senior officials of the Election Commission, the report said.

Video footage surfaced on social media showing supporters gathering just outside Khan’s residence in Lahore following an appeal by his party to protect him from security forces, highlighting his widespread popularity.

“They have to go through the courageous females and youth to get through to Kaptaan at Zaman Park!” the party said in tweet referring to Khan who was once the captain of the Pakistani cricket team. “Pakistanis are brave and determined, Lahore now belongs to Kaptaan.”

--With assistance from Muneeza Naqvi and Khalid Qayum.

(Updates with Khan’s mixed showing in a recent slew of by-elections and local polls.)