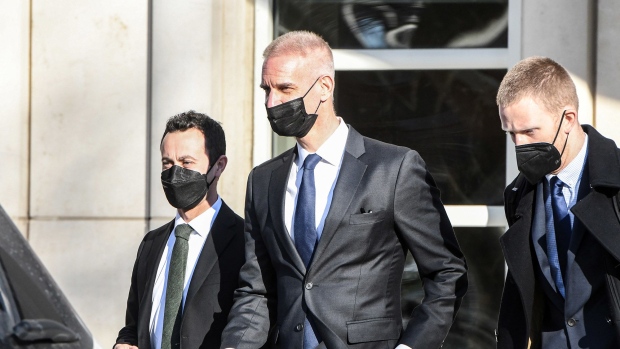 Leissner, 52, the U.S. government’s star witness in its case against ex-Goldman banker Roger Ng, provided a description of the payment system Wednesday for a jury in Brooklyn, New York. Leissner told of a meeting at which Jho Low, the alleged architect of the massive fraud, spelled out who he said needed to be paid off for approval to raise and spend billions of dollars for Malaysia’s wealth fund, 1Malaysia Development Bhd.

Low “said the sheikh would not get out of bed for less than $100 million,” Leissner told the jury.

Sheikh Mansour hasn’t been accused of wrongdoing by the U.S. The UAE government media office and UAE Foreign Ministry didn’t immediately respond to an emailed request for comment.

Leissner’s testimony about the alleged payments came in his third day on the stand in the trial of Ng, his former subordinate at the bank and the only Goldman employee to be put on trial for the 1MDB scandal. Billions of dollars were siphoned from funds meant for development in Malaysia. Leissner pleaded guilty in 2018 and his cooperation in the trial may help him get a reduced sentence. Ng has pleaded not guilty to money laundering conspiracy and bribery charges, and his defense lawyers say he warned Goldman officials about doing business with Low.

The trial was interrupted Wednesday by revelations that the government failed to turn over more than 15,500 documents related to Leissner. The judge has said she will pause the trial before defense lawyers begin questioning Leissner, and Ng’s attorney has said he may ask for a mistrial.

The meeting Leissner described while on the stand took place at Low’s home in the Mayfair section of London in 2012, not long before Goldman greenlighted work on 1MDB and raised $1.75 billion for the fund, Leissner testified. The project couldn’t move forward unless 1MDB secured an outside guarantor for the debt it was about to take on, he told the jury. He said Low, who held no official position at 1MDB but exerted outsize influence there, was able to get that guarantee from the sovereign wealth fund of Abu Dhabi and its subsidiaries.

At the meeting, Low took out a piece of paper and “started drawing boxes,” Leissner told the court. On one side of the page were several boxes for Malaysian officials who needed to be paid off, and on the other were boxes for the Abu Dhabi officials, he said.

Low said that at the top levels, payments to the Malaysia and Abu Dhabi sides of the criminal enterprise “had to be the same and be perceived to be the same,” Leissner testified.

“In my mind, that meant both sides had to get $100 million,” Leissner testified. “I can’t say I was surprised,” he added, saying years of working in emerging markets had taught him that bribes and kickbacks were sometimes associated with projects involving government officials.

At the end of his presentation, Low said Leissner and Ng would also be “taken care of,” Leissner testified.

“I was of course happy that I was about to make some additional money,” he told the jurors. “I wanted to make more money, even though I was well paid at Goldman Sachs.”

Leissner said that after the meeting he and Ng walked back to Leissner’s hotel.

“As Roger and I walked, we agreed we would never say anything to anyone at Goldman Sachs or outside Goldman Sachs” about the payments “other than the participants that were there,” Leissner testified.

“Bribes had to be paid to make it happen,” he said, “but we always kept it to the two of us.”