We have a shortage of refinery capacity which is below pre-pandemic levels: RBC’s Croft

Rob Hryszko’s phone is ringing off the hook. The calls pour in from executives in Calgary’s oil industry who want to know if he can build them a multimillion-dollar luxury home.

Hryszko says yes, sort of, and then asks them to get in line.

There are now 28 on the wait list. For Veranda Homes Ltd., a small Canadian family-owned business that usually builds 12 to 15 residences a year, this is a lot. Those at the end of the line won’t get their homes built until 2024.

For Hryszko, it all brings back memories of the go-go days of the mid-aughts, when oil was soaring toward a peak of about US$140 a barrel and Calgary, in his words, “was on fire.” The boom in Canada’s energy capital today is not quite the same as that one -- it’s less drill-baby-drill, more cautious salting away of windfall profits -- but Hryszko can barely notice the difference. “This feels a lot like 2006, 2007,” he says. So high is his optimism that he’s making plans to almost double his home-building capacity.

At a time when post-COVID economic expansions are cooling across much of the globe, Canada’s is rolling right along. No economy in the Group of Seven industrialized nations, and few in all of the developed world, is growing faster.

And Calgary, surrounded by fields of oil, natural gas, wheat and barley that make Canada a global exporting powerhouse, is at the epicenter of it all. Its employment rate is one of the highest of any large Canadian city and home sales were up 58 per cent in the first quarter. Job creation in the province of Alberta is expected to top the nation this year (though it wasn’t enough to save Premier Jason Kenney’s job).

It’s been a long time coming. The effects of the 2014 oil crash lingered for years. The failure to complete major pipeline projects, and the ascension of Justin Trudeau to power in 2015, only amplified resentment of the financial and political centers to the east. Now the windfall from oil and gas revenue is generating prosperity even as other parts of Canada face a slowing real estate market and other headwinds.

“It feels like we’re finally having our turn here,” Hryszko says.

There’s a dark side to all of this, too, though. Not only is the boom generating the same acute shortages and runaway inflation that are rocking governments across the globe, but it highlights a reality that some Canadians would prefer to ignore: Commodity exports are still the engine that propels the economy. In March, the fossil-fuel industry represented 27.4 per cent of merchandise exports -- matching a record.

And for all of the Trudeau government’s bona fides on climate change, weaning the country, and its politicians, business leaders and workers, off of fossil fuels will be an enormous challenge. In fact, the war in Ukraine, and the efforts to move away from Russian energy, has offered Calgary’s oil patch a we-told-you-so moment.

“Canada could be supplying more energy to the world if we’d gone ahead with a few projects. And that’s one of the things that frustrates people in Alberta quite dramatically,” said Deborah Yedlin, chief executive officer at Calgary Chamber of Commerce. “We should be more of a global player, and we’re not because we don’t have enough infrastructure.” 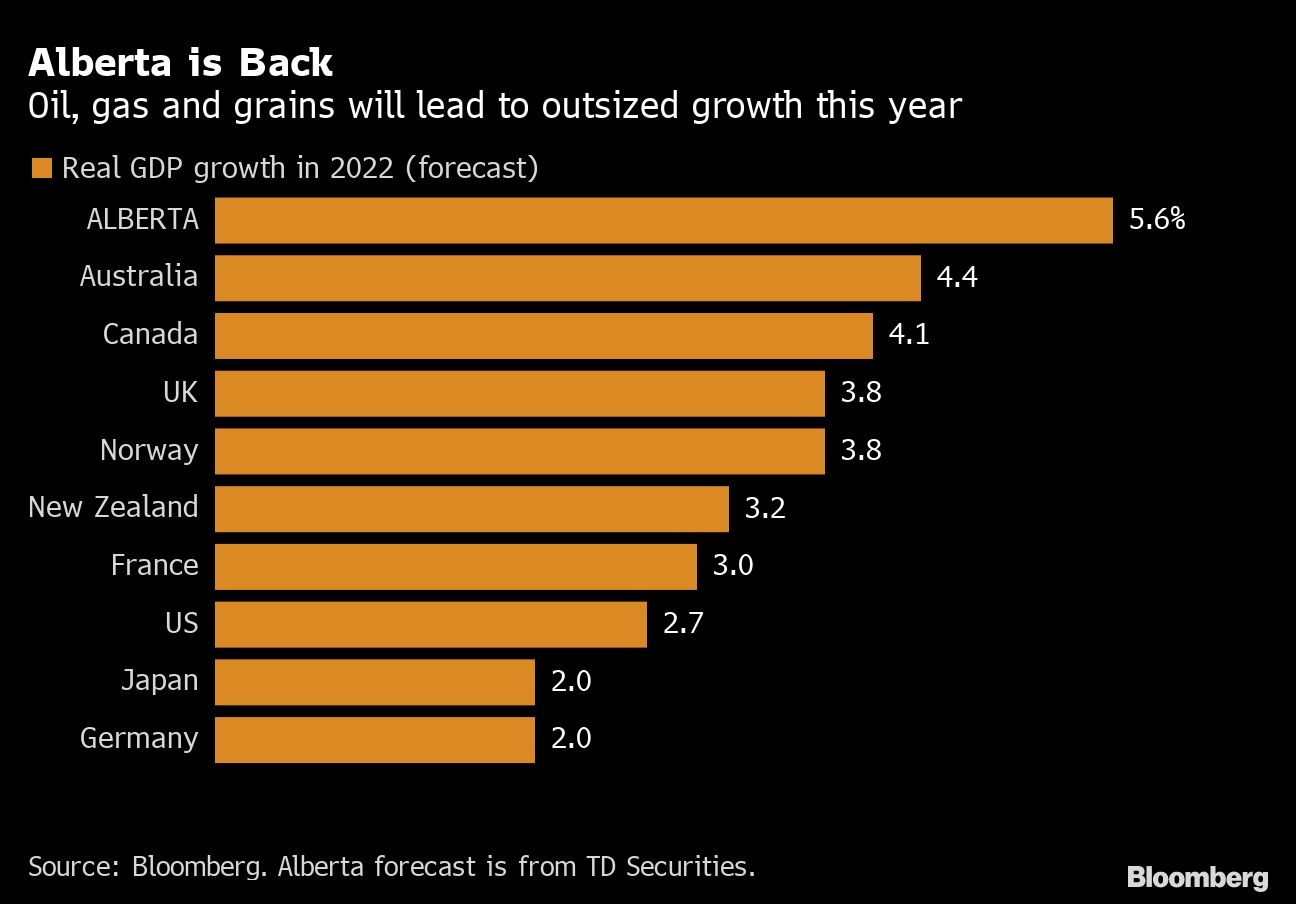 Sit down in C-suites with energy executives across Calgary and it becomes evident that they’re acutely aware of the contradiction between Canada’s economic and environmental policies.

Without fail, they all are quick to accentuate the greener elements of their business plans. Some of this is genuine. As high as crude prices are now, peak oil, they know, isn’t too many years away. What’s more, Trudeau has given them an order to cut emissions 42 per cent from 2019 levels by 2030. But a lot of it sounds like a 2022 version of the same embrace-the-future message they’ve been giving for decades -- the claim that energy riches will pay for diversification and innovative methods for cleaner energy production.

There’s just no easy substitute for the money-minting power of oil and gas. The energy sector represented 25 per cent of Alberta’s economy last year and about nine per cent of Canadian output.

A tiny example of the spinoff effects can be seen at the Petropolitan, a luxury pet-grooming and boarding business in the heart of Calgary’s downtown office district. Founded in 2019 and then hammered by the pandemic, the business is growing exponentially now. Revenue grew 125 per cent in the first quarter compared with the same period last year and is expected to jump 160 per cent in the second quarter.

“That growth is very promising,” says owner Hailey Seidel. She knows well the sharp economic turns of Canada’s west: her father was in the energy sector, and she still remembers oil bull markets of the past “when there was money raining from the sky.”

As with any entrepreneur in the city, she’s acutely aware of how bad things got after the last one turned south. Energy companies laid off so many workers that even before the pandemic hit, several downtown office buildings were completely deserted.

But Calgary is coming back. The 17th Avenue SW district, a retail and entertainment hot spot where Veranda’s office is located, is buzzing with students and young professionals. Hotel lobbies have business travelers again. Lunch and after-work crowds fill up popular spots downtown as more people are returning to offices.

And it’s attracting new residents again. Alberta led the country in net migration from other provinces in the fourth quarter -- mostly people from Ontario, Manitoba and Saskatchewan -- for the first time since 2015.

The influx of people isn’t great enough yet to meet companies’ need for workers. Seidel already raised prices by 10% to curb demand and increase wages to retain staff. She said she’d continue raising prices until she can complete her expansion plan, doubling the capacity of daycare space to accommodate 160 dogs and tripling the numbers of groomers to six.

High inflation, labor shortages and supply-chain disruptions still pose challenges for businesses in the province. For Hryszko’s Veranda, that means building costs are rising 20 per cent, as it competes for qualified workers and contractors and hires an additional manager to minimize delivery delays for everything from steel beams to refrigerators.

Still, it’s a good problem to have. If oil stays north of US$80 a barrel, “this is going to be a very, very healthy town to do business in, not just for myself as a home builder but for anybody,” said Hryszko.

“I’m really hoping that it’s not a boom-and-bust cycle again.”