Benchmark 10-year Treasury yields catapulted to the highest in more than a year at over 1.6 per cent and traders yanked forward their opinion of how soon the Federal Reserve will be forced to tighten policy. Equities tumbled, as higher borrowing costs put pressure on soaring valuations. Even Treasury Secretary Janet Yellen felt the sting, with record low demand for a fresh round of government debt.

Speculation is building that a year of emergency stimulus is not only working, but has left some areas of the economy at risk of one day overheating. Locked in the same patterns for months by the COVID-19 crisis, markets now appear to have begun a long-awaited process of repricing themselves, as trillions of dollars of federal spending and positive vaccine results boost odds developed countries will heal faster than central bankers expected.

“The economy is already recovering and a lot of people think that this stimulus proposed is much more than what’s needed,” said John Carey, portfolio manager at Amundi Asset Management U.S. “You put too many coals on the fire and we build the fire to a very intense level. People start to think the Fed won’t be able to keep rates where they are.” 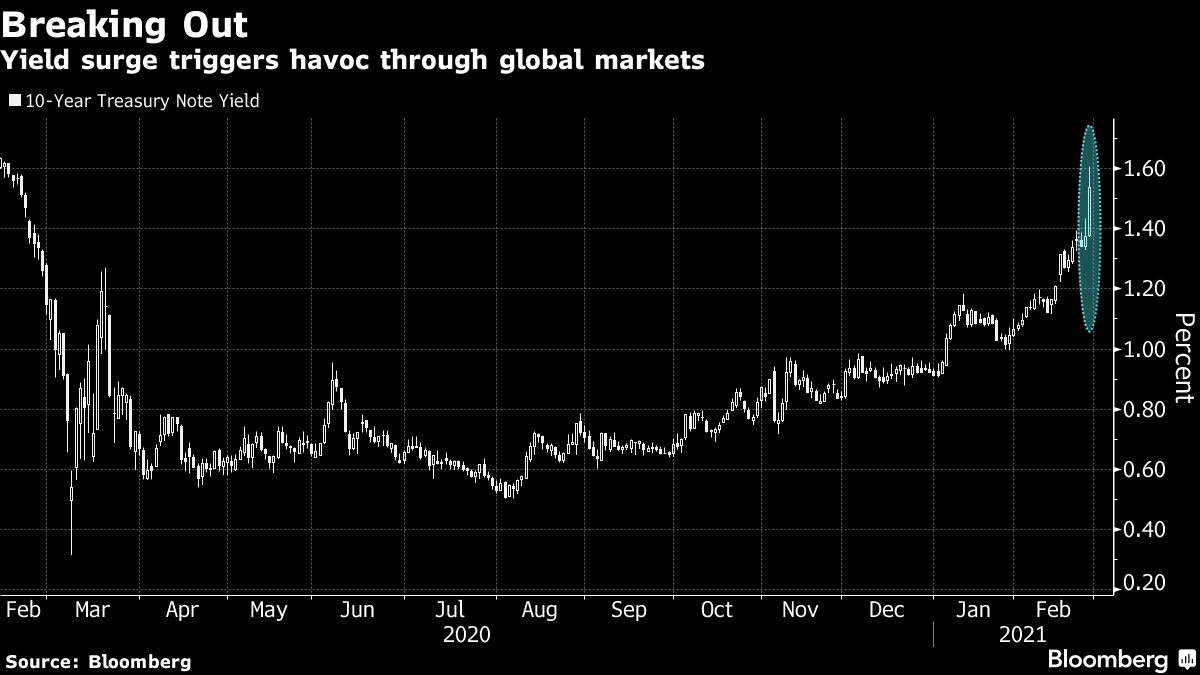 After holding at historically low levels since April, the jump in Treasury yields -- even if it bespeaks economic health -- is inevitably a jarring spectacle for traders, forcing them to reconsider positions in multiple markets. Megacap tech names -- previously the bull market’s darlings -- led the plunge on Thursday, with the Nasdaq 100 sinking almost 4 per cent as the rise in rates made it harder to justify valuations that are higher than any time since the dot-com bubble.

The bond selloff stalled in Asia hours on Friday, as markets paused for breath, following the whirlwind session which saw rising yields overwhelm areas of equities that tend to benefit from higher rates. The KBW Bank Index -- which climbed to its highest level since 2007 on Wednesday -- dropped by 2.7 per cent amid the carnage. Energy and utility shares in the S&P 500 also fell at least 1 per cent.

Currency markets were jolted as well. The Bloomberg Dollar Index rallied 0.7 per cent Thursday, the most since September, while historically volatile emerging market currencies slid. The South African rand, Turkish lira and Mexican peso led the drop in emerging markets, falling at least 2 per cent.

The impact of lockstep moves in bonds and stocks can be seen in sophisticated portfolio strategies such as risk parity, which try to balance exposure across assets, according to Wells Fargo Investment Institute. The US$1.2 billion The RPAR Risk Parity exchange-traded fund (ticker RPAR) dropped as much as 2.7 per cent -- its biggest decline since March 18, 2020, in the height of the pandemic rout.

“Right now those rates are increasing at a pace that may be unsettling to strategies such as risk parity, and the fixed income volatility is spilling over into other assets,” said Sameer Samana, Wells Fargo Investment Institute’s senior global market strategist. “Until the speed at which rates are rising slows, we may need to mentally prepare ourselves for more days like this.”

Breakeven inflation rates -- bond trader projections for where they see annual consumer price inflation averaging over the decade -- are at multiyear peaks. At about 2.2 per cent, it is up sharply from last year, when it fell as low as 0.47 per cent in March.

“We are in uncharted territory where we are likely to experience a global economic rebound with a global surge in inflation never experienced before,” said Bryce Doty, portfolio manager at Sit Fixed Income Advisors. “No one knows how it will play out.”

While the U.S. unemployment rate clocks in at a still-elevated 6.3 per cent, that’s below the 6.5 per cent level that policymakers had forecast last June. A string of economic data as kept Citigroup Inc.’s Economic Surprise Index in solidly positive territory since last June, including retail and housing reports that have handily topped forecasts.

For now, Fed Chairman Jerome Powell and his colleagues insist their best course of action is to hold interest rates low to ensure the recovery takes hold. Powell told the Senate Banking Committee Tuesday that the recent run-up in bond yields that has unsettled the stock market “a statement of confidence” in a robust economic outlook.

While that may be true, financial markets are relentlessly forward looking -- and see the risks that come with a potential overheating. For now, the most obvious manifestation of that is the bond-market selloff, with investment firms including BlackRock Inc.’s research arm and Aberdeen Standard Investments retreating from government debt.

“When the bond market wants to run, it’s going to run much faster than any central banker, and that again is on full display,” said Peter Boockvar, chief investment officer for Bleakley Advisory Group. “Also, be careful what you wish for. Don’t spend all your waking hours trying to artificially suppress interest rates and then root for higher inflation because when the market thinks that inflation will come, it will run you over.”