The stock market is heading into an unprecedented earnings season. With little clue as to how and when the global economy will sputter back to life after its historic thrashing from the coronavirus, companies have pulled profit forecasts and investors are flying blind.

Even rare companies that have enjoyed a boost to sales because of the virus, such as Loblaw Cos., say the situation is too uncertain to give an earnings outlook.

One thing is clear though: Dividend cuts and suspensions are likely to keep on coming. Companies in Canada’s S&P/TSX Composite Index are poised to see a dividend decline of one per cent for the second quarter compared to a year ago, according to data compiled by Bloomberg, while the S&P 500 is expected to post five per cent dividend growth.

“What would put the dividends in jeopardy is a significant decline in profits and that’s what we’re facing today,” Ryan Bushell, president at Newhaven Asset Management, said by phone. “There’s virtually no business that’s immune from what’s going on. A great chunk of the economy is shut down. It puts things that were theoretically gold-plated or very certain, now uncertain.”

For some sectors, the cuts will be deep, as the chart below shows. Energy, already on a weak footing before the pandemic and oil price war, will see the biggest decline in dividends in the second quarter. Industrials and consumer discretionary stocks are also likely to take a hit as government-imposed lockdowns shutter factories, restaurants and stores, throwing a record 1 million Canadians out of work in March -- a collapse in both supply and demand. 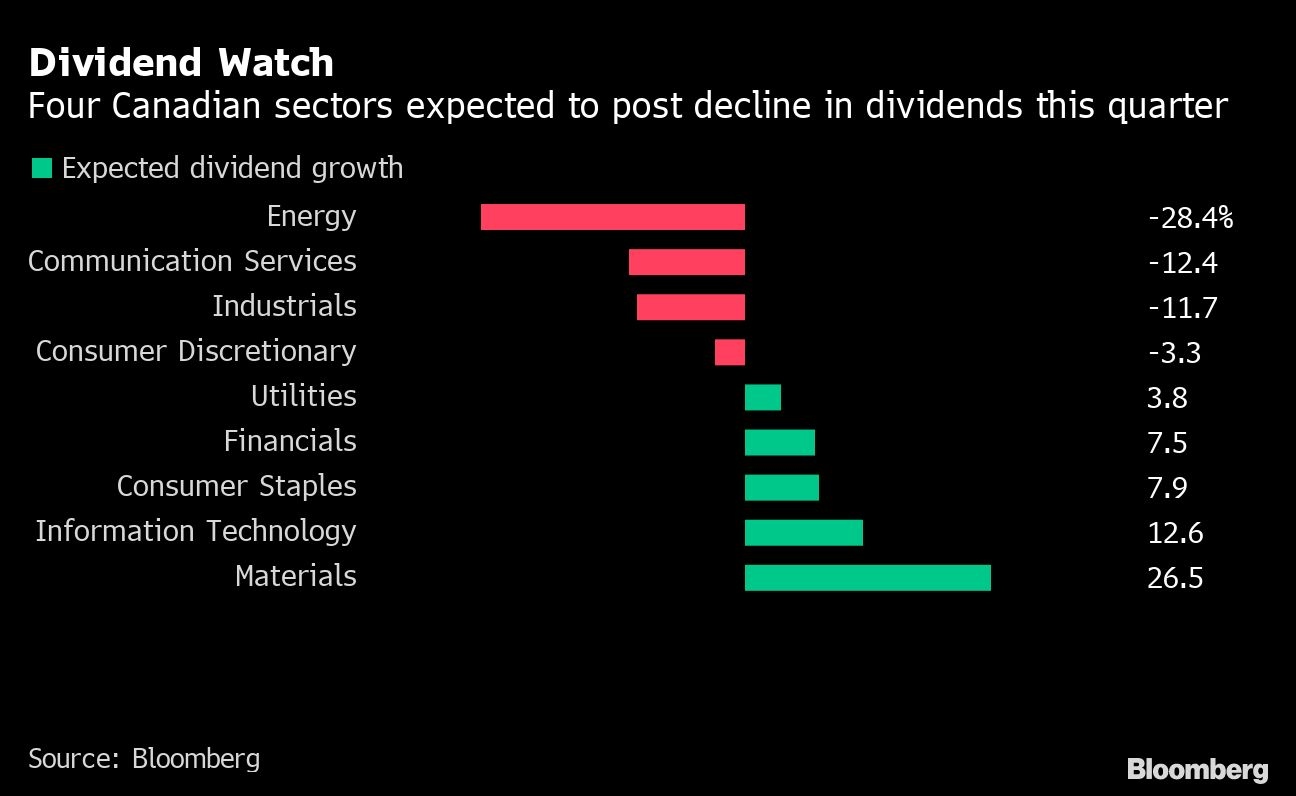 Real estate trusts, usually stalwarts when interest rates are falling, have been marked down by investors who worry about higher vacancies and tenants not paying. Double-digit yields on companies such as Brookfield Property Partners LP and H&R Real Estate Investment Trust suggest the market sees higher odds of a payout cut -- though much will depend on how long the crisis lasts.

But it won’t be a total wipeout.

Canada’s five largest banks, for example, have said their dividend policies remain unchanged even as regulators in Europe and Asia Pacific countries have asked lenders to suspend dividends.

Canadian Imperial Bank of Commerce Chief Executive Officer Victor Dodig said Tuesday the firm is well capitalized with “healthy” returns on equity and that won’t change any time soon. In a speech last week, Bank of Montreal CEO Darryl White highlighted the lender’s 191-year legacy of paying out dividends as one of the longest unbroken records for any company in the world.

That has given investors some comfort. At the nadir of last month’s sell-off, an index of the eight largest Canadian banks yielded 6.9 per cent. After a huge rally in the stocks, it’s now about 5.5 per cent.

With the price of gold surging amid the flight to safe havens, miners have actually boosted shareholder payouts. Newmont Corp., Agnico Eagle Mines Ltd., Barrick Gold Corp. and Yamana Gold Inc. were among producers that raised dividends two months ago.

Utilities and consumer staples companies are also expected to boost dividends this quarter, according to Bloomberg data, as almost everyone stays at home.

“When someone buys the shares, they are counting on that dividend in perpetuity or at least for a very long time,” Bushell said. A cut in the dividend is, at least in the short term, more detrimental than the cancellation of a share buyback program, so management teams are more focused on preserving the payout, he said.

Some companies have already announced the suspension of dividend payments: 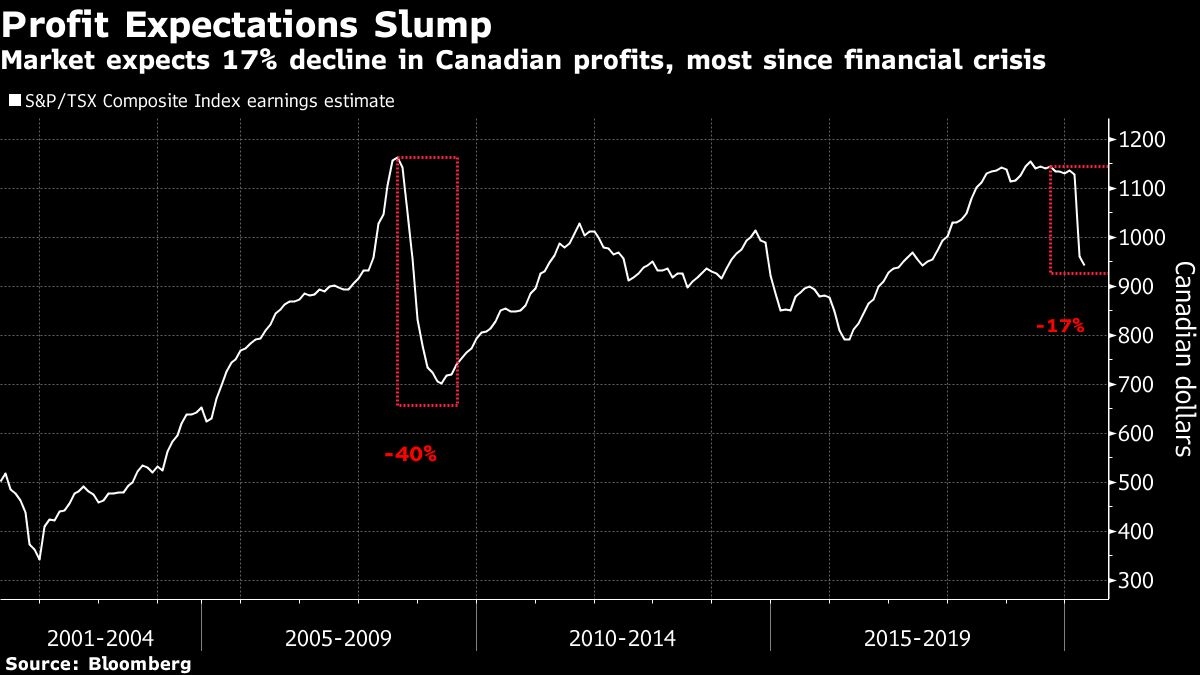 Analysts have slashed their profit estimates for this upcoming reporting season by about 17 per cent. They may be behind the curve. The forecast is less than half the 40 per cent drop they expected during the global financial crisis, when global trade was still flowing across the world.

“You’ve seen a lot of companies reducing management salaries, reducing capital expenditures in order to defend their dividends,” Bushell said. “And I think that is the more prudent thing.”