In a sector ripe for revival, Algernon's development pipeline positions it well - BNN Bloomberg
{{ currentBoardShortName }}
Markets
As of: {{timeStamp.date}}
{{timeStamp.time}} 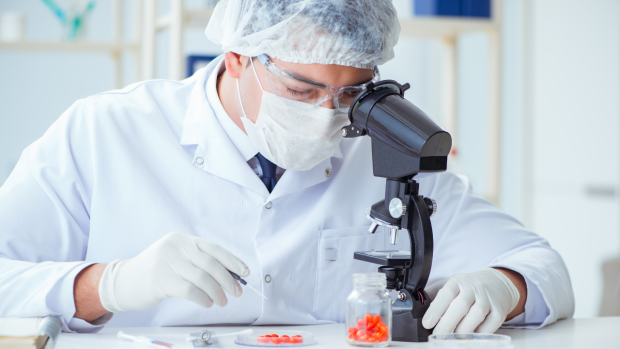 Biotech is expensive ­– you identify a problem, a solution and a potential product. However, to get that product to market can take years and involve investment in the tens or even hundreds of millions of dollars.

But if you could bypass some of the early challenges — for example, addressing safety concerns associated with the use of a drug — you could eliminate a huge cost and the biggest period of risk for investors.

That is at the core of business for Algernon Pharmaceuticals Inc. (CSE: AGN | OTCQB: AGNPF | XFRA: AGW), which has three promising treatments in its development pipeline aimed at unmet medical needs with global market opportunities.

Algernon is a clinical-stage drug development company that exploits the benefits of drug repurposing, seeking new applications for drugs that are already approved, off patent and have a strong safety history. After identifying potential drug candidates, Algernon investigates the drugs for new disease indications and then files for new patent protection.

“Leveraging the history of a drug and leveraging its safety data is what drug repurposing is about,” explains Algernon’s CEO and director, Christopher Moreau. “The complexity on the other end comes from having to file new patent applications for the drug and protecting your new intellectual property.”

In the case of the IPF, Moreau says the company is investigating the use of Ifenprodil (or NP-120, an NMDA receptor antagonist and formerly a Sanofi drug) and its Phase 2a IPF and cough study showed patients treated with the drug had stable or improved lung function over a 12-week treatment period. 30 per cent of subjects achieved the endpoint of a 50 per cent reduction in the average number of coughs per hour over 24 hours from baseline to week 12. The next stage of research, a Phase 2b study is now in the works.

Algernon is also examining the use of Repirinast, a mast cell inhibitor, developed in the 1980s by Mitsubishi to treat asthma for CKD treatment. Moreau says the animal study is showing promising data and the company is aiming to follow through with its first human study in early 2023.

While DMT has never been previously approved, it has been primarily used for its psychedelic effects for centuries in religious ceremonies as a traditional spiritual medicine by indigenous people in the Amazon basin. A hallucinogenic that produces effects similar to those of other psychedelics like LSD, ketamine and psilocybin, DMT occurs naturally in many plant species. It can also be synthesized in a laboratory. In Algernon’s hands, it is being “repurposed” away from its psychedelic effects for its potential to treat stroke at a non-psychedelic dose.

“On its own after a stroke, the brain is trying to make new connections to compensate for the damaged area. It seems that DMT is aiding and abetting that process from the preclinical and animal study data. We hope to see this effect repeated in our human study.” – Christopher J. Moreau, CEO and director, Algernon Pharmaceuticals Inc.

“We’re trying to see if it will help heal the brain after stroke and we’re doing it without giving people the psychedelic experience,” Moreau says.

Lab testing has shown that neurons exposed to DMT grow and make new connections — neuroplasticity — and “all of the growth that occurs in the neurons creates new opportunities for synapses, where brain cells can communicate with each other.”

In an animal study, he says, rats that experienced a stroke and were then treated with DMT showed a smaller area of damage in the brain, called the infarct volume, when compared to controls and almost had a full recovery of motor function after 30 days.

“On its own after a stroke, the brain is trying to make new connections, called neuroplasticity, to compensate for the damaged area,” Moreau explains. “It seems that DMT is aiding and abetting that process in the animal study. Even at a sub-psychedelic dose, DMT is active in the brain helping it reactivate and make new connections. DMT helps by increasing the production of brain derived neurotrophic factor (BDNF) which is involved in neuro pathway growth”

“We hope to see this same effect repeat in our human studies.”

Algernon has received approval for its Phase 1 DMT stroke study starting before the end of this year and involving 60 people, and the focus will be on prolonged intravenous infusion of the drug at sub-psychedelic doses for durations that have never been clinically studied. One key piece of the planned study is to identify the safety, tolerability and pharmacokinetics of DMT when administered as an intravenous bolus initial injection, followed by prolonged infusion. This also means monitoring a patient’s heart rate and blood pressure to determine whether DMT could be used for hemorrhagic strokes (those caused by bleeding in the brain) as well as ischemic strokes (those caused by a blockage of blood flow to the brain). This would be another significant breakthrough in determining if DMT can possibly help all stroke victims, not just those who have suffered an ischemic blockage.

“If you could deliver DMT early [after a stroke] and it reduces some of the damage caused by a stroke, that would be really good,” Moreau says, adding, “If it’s the earlier the better, the data will tell.”

There’s certainly a need for post-stroke treatment as well. According to the Centers for Disease Control and Prevention, almost 800,000 people suffer strokes each year in the U.S., and the global total is roughly 15 million. Additionally, the prevalence of post-stroke cognitive impairment ranges from 20 per cent to 80 per cent.

“The potential to help stoke victims heal after their stroke is a completely new approach to stroke treatment.” said Moreau.

Biotech has its up and downs, Algernon is well positioned

While Moreau and the Algernon board are optimistic about the prospects for Ifenprodil, Repirinast and their proprietary version of DMT, they are operating at both a challenging and promising time for biotech companies. The sector slowed in the first half of 2022 but both it and Algernon have rebounded.

Although the sector was down 20 per cent for the year in August, it’s in the midst of a comeback. In addition, the global biotechnology market was estimated at US$1.02 trillion in 2021 and is expected to grow at a CAGR of 13.9 per cent by 2030.

A leading Canadian investor and major Algernon shareholder is also enthusiastic about the company’s prospects.

Steve Palmer, president and chief investment officer of AlphaNorth Asset Management, a Toronto-based small-cap investment firm that owns 13 per cent of Algernon, says, “I like the fact that they have multiple [drug] programs. They’re lower risk than a normal biotech because they’re using drugs that are already known to be safe.”

He notes that Algernon’s work on Ifenprodil for treatment of IPF and cough, which represents a massive potential market. It is the most advanced in its product pipeline and the company’s market capitalization is much lower than those of its competitors with less promising drugs.

On the international stage at Miami psychedelics conference

Moreau says Algernon is hoping to generate similar enthusiasm as lead sponsor of November’s Wonderland psychedelic conference in Miami, Florida. On hand will be some of the psychedelic world’s leading founders, investors, therapists, practitioners, researchers, thought leaders, innovators and media.

NEWS RELEASE: Algernon will be the headline sponsor for Wonderland, the world-leading academic & business gathering in the psychedelic medicine industry.

🗓️ The conference will be held in Miami from November 3-5th, 2022 at the Mana Wynwood Convention Centre.

Moreau, who has more than 30 years of senior management experience in private and publicly traded companies, including a strong background in biotech research, has raised over $60 million from the capital markets says he believes Algernon is well positioned in the psychedelic sphere to address stroke’s US$15 billion global market.

“We’re stepping up our visibility,” he says, noting that he will give two keynote addresses at the conference, on repurposing DMT and the science of DMT.” Moreau’s two keynote addresses will be on the Business of Drug Repurposing DMT and a science session on the preclinical data showing DMT’s promise as a new potential treatment for stroke. Dr. Rick Strassman, author of the book DMT: The Spirit Molecule and Algernon consultant, will be joining Moreau for the science session.

“We’ll have an opportunity to get Algernon’s model and our name in front of a larger market, so investors know our story,” Moreau says. “That’s the bottom line.”

Make sure to follow Algernon on social media for the latest news: