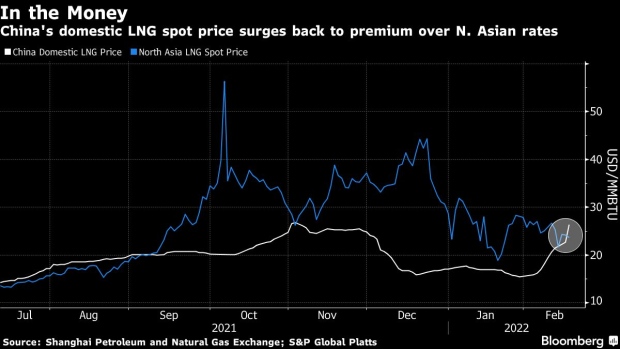 (Bloomberg) -- China’s domestic liquefied natural gas price has rallied to the highest in more than three months, a level that could spur some overseas procurement of the heating fuel.

The surge in prices, which jumped to the highest level since November, has once again made it economically viable to purchase LNG from the international spot market for sale into China, a dramatic turnaround after months of it being unprofitable. It’s also pushed up the premium to North Asian rates to the highest since August, according to data analyzed by Bloomberg.

With colder weather depleting inventories across northern parts of the country, China -- the world’s biggest importer of the fuel -- may seek to snatch up LNG spot prices, further tightening global supplies. Just last month, utilities were offering to sell shipments due in part to low profitability and strong inventories at home.

Available LNG supply through the rest of the winter is dwindling as rival buyers in South Korea and Japan purchase spare cargoes. Meanwhile, geopolitical uncertainty in Europe has resulted in wild swings in spot prices for natural gas in the Atlantic and Pacific.

Cold waves have moved from the north to the south this week, bringing snowfall or heavy rain to southern China. Temperatures will remain low till Thursday in southern China and climb above 20 degrees Celsius in the southern part of Guangdong province this weekend, according to a forecast by the China Meteorological Administration.

The Tianjin LNG import terminal, located close to northern China, has curbed trucked deliveries of the fuel to prioritize supplies for heating, as city-gas distributors have to restock inventories.

The country’s LNG restocking may be underway as Asia price could test $50 per million Btu as the Ukraine crisis intensifies, said Bloomberg Intelligence analyst Henik Fung. Some places in Xinjiang have already cut supply to the industrial and transport sectors to secure gas for residential use.