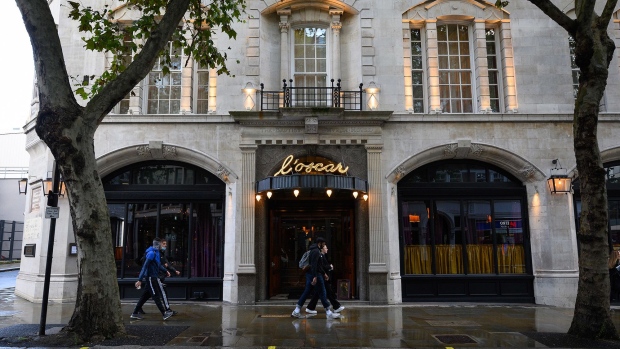 (Bloomberg) -- It was called “one of the most hush-hush transactions” in London’s real estate market.

A group of anonymous investors, represented by a little-known firm called Triangle Group, had outbid much more established players for a massive commercial and residential development steps from the British Museum. No one in the city’s notoriously gossipy property circles seemed to know who was behind the 212.5 million-pound ($292 million) purchase in June 2014.

Seven years later, documents obtained by a group of investigative journalists show one of the buyers was an associate of Azerbaijan’s ruling Aliyev family, which has plowed hundreds of millions of dollars into London real estate in the almost three decades it has run the oil-rich country.

The other party, according to the documents and people with knowledge of the transaction, was an offshore company whose director had close ties to embattled German landlord Adler Group SA and one of its biggest backers, Austrian tycoon Cevdet Caner.

The secretive deal is one of many that appear to tie Adler and its main shareholders to Azeri investors. The German landlord has come under attack from short sellers and a whistleblower over a lack of transparency in its dealings and ownership structure. Some Azeri-linked transactions have been called out in a report by Fraser Perring’s Viceroy Research, which has accused Caner of leading an opaque “cabal of cleptocrats” who have stripped the firm of value. Adler and Caner have rejected the allegations.

For shareholders in the landlord, the alleged ties may have current implications. Companies controlled by one Azeri investor still owed Adler almost 250 million euros ($286 million) as of June, for deals that go back as far as four years, filings show. That accounted for about one-third of the receivables pile that has come under scrutiny as the embattled landlord seeks to prove that it can pay down billions of dollars in debt.

Many of the transactions that appear to link Adler and its backers to the Azeri investors are based on the reporting of the Organized Crime and Corruption Reporting Project. The nonprofit journalistic group in October used documents from the Pandora Papers to show how the family and associates of President Ilham Aliyev acquired hundreds of millions of dollars in London real estate over the years, with funds whose origin remains unclear.

The documents also suggest that the financiers behind Adler’s transformation into one of Germany’s largest landlords interacted with key figures in the Aliyevs’ financial empire, bought properties from them, and even employed two. Many of the deals involve Triangle, which listed at least two directors accused by the OCCRP of helping the Aliyevs acquire property.

Caner denied any role in the Azeri-linked deals. The second Adler-backer, Aggregate Holdings, said it wasn’t aware at the time that any of the deals it engaged in involved middlemen who have since been shown by the OCCRP to be associates of the Aliyev family. Aliyev’s press secretary denied by phone that the president or members of his family knew Caner or any of the people and offshore companies linked to them by the OCCRP. Triangle and its directors didn’t respond to multiple requests for comment.

Holborn Links -- a portfolio stretching over 3.3 acres of Central London that houses everything from million-pound apartments on Southampton Place to the historically protected Sicilian Avenue where boutique store fronts are framed by Italian marble columns -- drew bids from well-known investors like Legal & General Plc and garnered plenty of attention.

At the time, Triangle described the buyer as a consortium named Perez International. But documents obtained by the OCCRP show Perez was an offshore company controlled by a key figure in the Aliyev’s financial empire, Ashraf Kamilov. Kamilov didn’t respond to a request for comment.

The documents also show that Kamilov worked together with a second offshore company by the name of Sollidaire Limited. The latter listed as its director a lawyer who also held top roles at companies Caner’s family invested in, including serving as director of the investment vehicle through which Caner’s family bought its stake in Adler, and on the board of Adler Real Estate itself. Two people familiar with the deal, who requested anonymity, said Caner was involved in the Holborn Links purchase.

By late 2016, Holborn Links was back on the market, along with two nearby properties that Kamilov had purchased four years earlier with help from Triangle. Those two properties, boutique hotel L’oscar London on Southampton Row and a building next door that used to house a bank, were acquired by a long-time business associate of Caner’s, Austrian investor Guenther Walcher.

Through his investment firm Aggregate Holdings, Walcher is the biggest shareholder in Adler Group. Having made his fortune with electronic access systems for ski lifts, he was introduced to real estate investing by Caner, who still advises Aggregate on a deal-by-deal basis.

The Azeri owners of the hotel had installed two directors from Triangle to oversee the L’oscar London, Gafar Gurbanov and Metin Guvener. Rather than replace them with its own directors, Aggregate continued to employ them for four more years, until March of 2021, lawyers for Aggregate confirmed by email.

Both directors have since been linked to the Aliyev family by the OCCRP. Gurbanov, a former official at Azerbaijan’s tax ministry, served on the boards of several offshore companies that helped the Aliyevs buy real estate. Guvener brokered a Bucharest property deal for the family.

Aggregate, through its lawyer, said it wasn’t aware at the time of their alleged ties and that there was nothing “untoward” about the transactions and their continued employment. They stayed on, along with a hotelier they worked with, to support the construction of L’oscar London. Aggregate had relied on due diligence and “know your client” checks of a reputable U.K. law firm during the transaction, the lawyers said.

The two assets weren’t the only ones in Aggregate’s portfolio that were previously owned by Kamilov. In August 2016, it also bought a property on Maddox Street Row near London’s famous Grosvenor Square in Mayfair, capping a series of transfers for the asset. Kamilov bought the property in 2009 and transferred it to Ilham Aliyev’s then 11-year-old son, according to the OCCRP. Seven years later, Kamilov took it back and moved ownership of the property to another offshore company for one day, before Aggregate bought it. Aggregate sold it off after just four months, the documents show.

Aggregate’s lawyers said it’s “common practice” in the industry to reorganize legally before a sale and that it was the “responsibility of the seller’s regulated advisers to carry out relevant” anti-money laundering and know-your-customers checks. There was “no wrongdoing on the part of our client” and no “implication that Aggregate is somehow caught up in corruption and/or nefarious activity, which is simply not the case,” they wrote in a statement.

Indeed, Aggregate wasn’t the only investor buying properties that were linked to the Aliyev family. Other London deals revealed in the Pandora Papers include the 2018 purchase of an office and retail building near Maddox Street Row by the Crown Estate, the property company that manages real estate on behalf of the British monarch. The revelations prompted the Crown Estate to launch an internal review, the Guardian reported last year.

In Adler’s case, the alleged Azeri connections extend to the landlord itself. Short seller Perring, in his October report, highlighted a series of transactions that Viceroy said involved another Azeri national linked to Triangle, Harvard-educated Natig Ganiyev. Like Gurbanov and Guvener, Ganiyev is listed as a former director at Triangle Equity Partners Limited.

While that company has since been dissolved, other companies linked to or owned by Ganiyev have engaged in a string of deals with Adler. In 2017, a partnership advised by Ganiyev’s Vestigo Capital Advisors LLP -- previously known as Triangle Equity Partners (UK) LLP -- bought a stake in Berlin-based Accentro Real Estate AG from Adler Real Estate. Another firm owned by the Azeri businessman later purchased assets worth about 400 million-euros from Adler, filings show.

But as of the end of June, Ganiyev’s companies still owed Adler 249 million euros for those transactions, including 60 million euros for the Accentro deal four years ago, according to Adler’s second-quarter report. It’s unclear how much has since been repaid because Adler didn’t disclose the breakdown of receivables with its third-quarter earnings.

Perring argues that Adler uses such transactions to mark up the value of its holdings, while the agreed price isn’t actually settled in full. Adler has rejected Perring’s allegations while declining to provide more details on its receivables.

“As a rule, we give transparency along our financial calendar but do not provide water level updates,” Adler said by email. “We will provide a comprehensive view with our full-year 2021 results.”