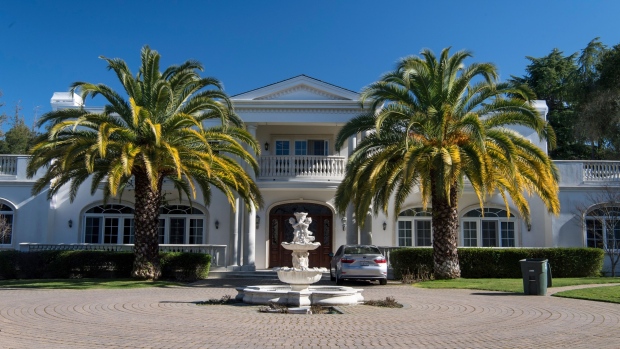 A home stands in Atherton, California, on Tuesday, Feb. 18, 2020. For the fourth straight year, Atherton topped Bloomberg's Richest Places annual index. With an average household income of more than US$525,000, it became the first and so far only community to top the half-million dollar mark since Bloomberg started compiling the index in 2017. Bloomberg/David Paul Morris

You could easily drive through this leafy Silicon Valley suburb without realizing you were in America’s richest neighbourhood. From the road, it’s all high-brick walls and opaque gates.

It takes Google Maps to get a glimpse of what lies behind. Satellite images of Atherton, California — where the average household income just blew past half a million dollars — reveal the sprawling homes of tech billionaires and sports stars, studded with tennis courts and pools.

For the fourth straight year, Atherton topped Bloomberg’s Richest Places annual index. With an average household income of more than US$525,000, it became the first and so far only community to top the half-million dollar mark since Bloomberg started compiling the index in 2017.

At least some of the town’s Silicon Valley neighbors are more or less keeping up. Atherton is joined in the upper echelons of the Bloomberg list by Hillsborough (No. 3) and Los Altos Hills (No. 5), two more communities in the hi-tech corridor between San Francisco and San Jose. Both have average incomes upwards of US$400,000.

Elaine White, a real-estate agent and native of neighbouring Redwood City, has watched the tech boom shape the region.

“Because of how big Facebook has gotten, and Google, we’ve kind of become this concept of the company town, where so many people work for these Silicon Valley companies,” she said.

In Atherton, the cheapest house on the market is currently listed for US$2.5 million, according to real estate marketplace Zillow.com. Numerous tech billionaires have called the town home, including Google’s Eric Schmidt, Facebook’s Sheryl Sandberg and Microsoft’s late co-founder Paul Allen, whose former residence there was sold last week for more than US$35 million. Golden State Warriors athlete Stephen Curry bought an Atherton estate last year for US$31 million.

In second place for the second straight year is Scarsdale, New York, less than 25 miles outside Manhattan, with an average US$452,000 in annual household income. Also making the top 10 are a town near Denver, two northern suburbs of Chicago, and a wealthy enclave in Dallas, Texas.

In general, the East and West Coasts dominate the top-100 list. California takes up 23 places, while the tri-state area of New York, Connecticut and New Jersey accounts for 32 (although that’s down from 36 last year). Middle America is slowly gaining some ground. States including Illinois and Minnesota added one new listing in this year’s index, while Texas gained two (Lucas at No. 73, and Alamo Heights at No. 75).

Altogether, 16 states are represented on the list, the same number as in previous years — suggesting that the concentration of wealth in certain regions remains largely unchanged over time. Also, the richest communities continue to get richer. This year, in order to make the top 100, a neighbourhood needed an average household income of US$220,000 — up from US$209,000 last year.

Bloomberg evaluated inflation-adjusted household data for all U.S. locations with a minimum of 2,000 households (as defined by the Census), and ranked them based on average household income. Almost 6,300 communities met the criteria, which includes approximately 75 of total households in the U.S.