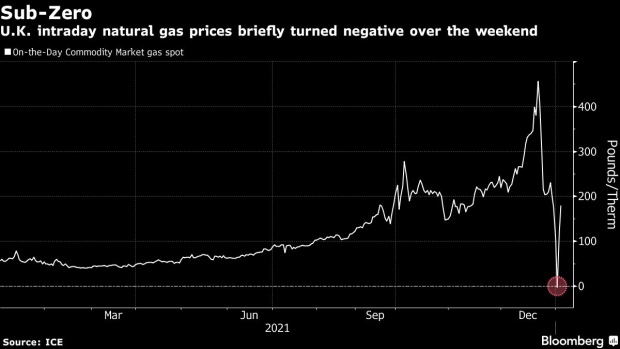 With Britain registering record-high temperatures on Jan. 1, the obscure U.K. gas price for on-the-day delivery -- a balancing market used to fine-tune supply and demand -- fell to as low as -2 pence a therm on Saturday and -1 pence on Sunday. Consumption was already expected to decline as businesses close for New Year’s day, but Norway kept on flowing gas, pushing prices below zero.

Obtaining gas for free or even getting paid to take delivery took traders by surprise after futures in the main market tripled last year. Unlike in oil, which grabbed headlines as prices briefly turned negative as the pandemic hit demand, U.K. gas fell below zero as energy shortages spread across Europe. Countries including France have already warned of possible power cuts in case of a cold snap.

The rare sub-zero drop is a stark example of the volatility facing Europe this winter, especially during brief periods of weak consumption. Traders who follow the market remember at least one other occasion when prices turned negative. That was in October 2006, shortly after a major pipeline linking Norway to the U.K. -- the Langeled link -- was opened.

Power markets often turn negative as a balancing mechanism, especially when grids are overloaded with renewable output. Such moves are far less common for commodities like natural gas, which can usually be put into storage when there is too much. But the U.K. is a special case: The country was left with almost nowhere to put inventories after deciding to shut its biggest storage facility -- accounting for about 70% of capacity -- back in 2017.

As the New Year arrived with record-breaking 16.3 degrees Celsius at London’s St. James’s Park, high Norwegian flows and low demand due to the holiday, there was simply too much gas -- even if just temporarily. The weekend’s negative price was short lived, with U.K. on-the-day gas rates recovering to over 100 pence by the end of the day on Sunday, and trading another 50% higher on bank holiday Monday.