A key question has emerged as investors pour billions of dollars into the marijuana industry: Will it be U.S. or Canadian companies that win the race for cannabis supremacy?

Businesses in Canada licensed to grow and sell weed have a head start, thanks to their government’s legalization of pot for adult use in October. They’re well funded and are touting their ability to export medical marijuana to countries around the globe that are relaxing restrictions.

Still, Canada’s population is smaller than California’s, and the U.S. market for legal marijuana is already larger than its northern neighbour, with estimates saying it could eventually be more than 10 times the size. As the thinking goes, America is where brands and fortunes are made, and there’s no reason to think that cannabis will be any different, despite the current federal prohibition.

“We’re going to have a great cannabis industry here, but the people who, for whatever foolish reason, thought that Canada was going to dominate the world of cannabis, they need to disabuse themselves of that notion because it was never founded on any reality,” said Afzal Hasan, president of Ottawa-based Origin House.

As it stands, the four biggest weed companies in the world, including two with valuations north of US$10 billion, operate in Canada. But among the top 10, half are now operating in the U.S. after a surge in American companies that are listed publicly in Canada. 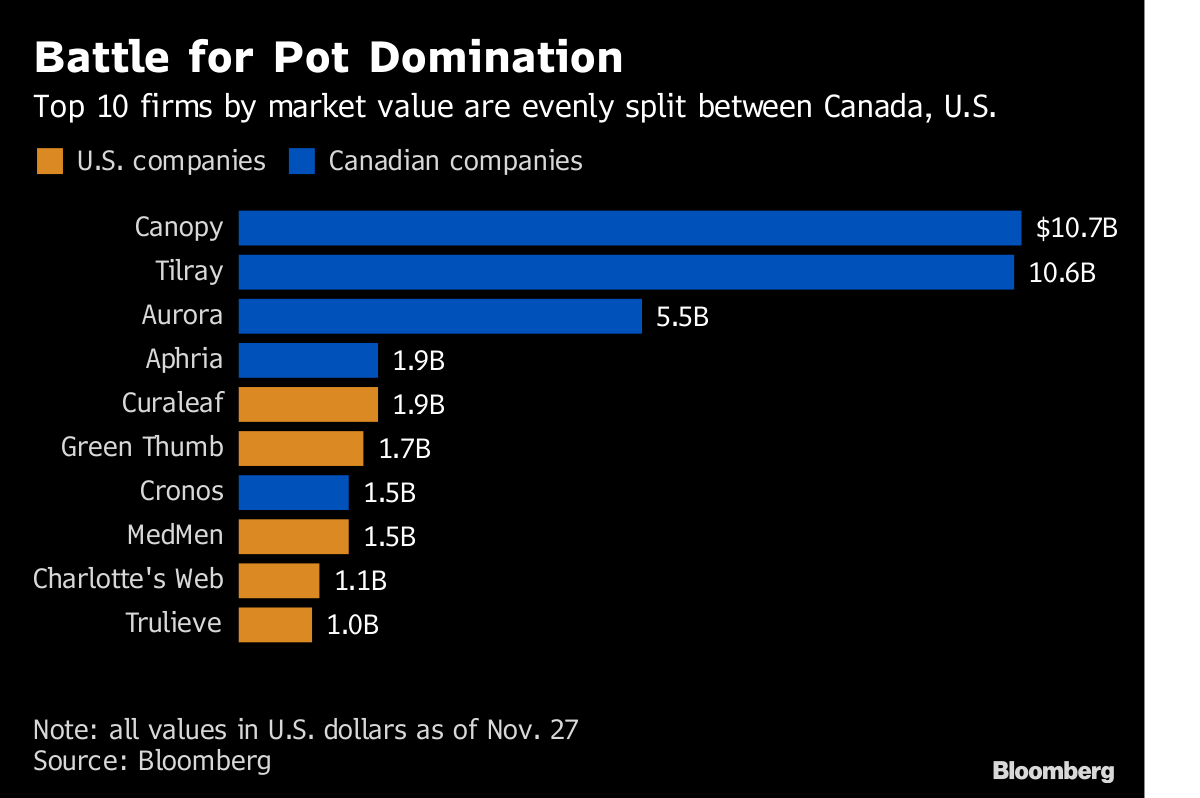 Here’s a look at the investment thesis for Canada vs. the U.S.

There are 133 licensed producers, or LPs, in Canada that have received green lights from the government to cultivate and sell pot in the medical and recreational markets. The most prominent are Canopy Growth Corp., Tilray Inc., Aurora Cannabis Inc. and Aphria Inc., which have a combined market capitalization of almost US$30 billion. A key advantage has been easy access to money as Canadian capital markets dominate financing and stock listings in the industry.

While Canada is the first major economy to legalize weed, it has a small population of less than 37 million that’s about a tenth the size of the U.S. population. Recognizing the limits of selling pot there, larger LPs are turning to international markets to drive growth. Many are prohibited from operating in the U.S. because they’re listed on the Toronto Stock Exchange, which has threatened to delist companies that violate U.S. federal law.

Instead, they’re turning to countries like Germany, Australia, Colombia and Israel to establish regional beachheads from which to sell medical marijuana. This option isn’t open to U.S. players, which can’t move cannabis across state lines, much less export it internationally.

“Using Canada as a lily pad from which to leap to the rest of the world can lead to a lot of success,” said Sean McNulty, co-founder and adviser at Canopy Rivers Inc., the venture capital arm of Canopy Growth. “There will be a handful of companies that emerge from Canada that are global champions.”

The risk for Canadian pot producers is that they become nothing more than farmers, producing a low-margin commodity while their American cousins reap the financial benefits -- including higher profit margins -- of selling recognized brands. The laws in Canada prevent most marketing and branding, a hurdle for companies trying to connect with consumers.

“If you look at Corn Flakes, you don’t know where the corn comes from, you don’t know the name of the farmer,” said Rob Cheney, chief executive officer of C21 Investments Inc., a U.S.-focused cannabis company.

Origin’s Hasan sums it up like this: “We’re not as aggressive and competitive and capitalistic as the folks down south of the border.”

Canadian cannabis retailers looking for new markets may soon be in luck as New Jersey takes a step toward legalization. Jon Erlichman explains.

The most valuable pot companies operating in the U.S. are what’s known as “multi-state operators” -- companies that have acquired licenses to grow, distribute and sell weed in the various states around the U.S. that have legalized some form of pot. This includes Acreage Holdings Inc. and Curaleaf Holdings Inc., which raised more than US$700 million combined in recent weeks through private placements as they went public in Canada.

More than 30 states now allow medical marijuana and Michigan became the 10th to approve recreational use earlier this month. With public support for legalization in the U.S. greater than 60 per cent, there is growing optimism that restrictions will continue to be relaxed. That means more of the world’s largest consumer economy will have access to legal pot -- a mammoth incentive for investors.

“You have a huge potential market that is moving quickly toward legalization,” said Andrew Kessner, an analyst at William O’Neil. Still, the U.S. stocks are currently “far less liquid,” which can be a problem for large investors.

The federal prohibition on weed has largely kept institutional investors on the sidelines. But as more states ease restrictions, capital is flowing to U.S. companies. A key turning point came in April, when Senator Cory Gardner, a Colorado Republican, said President Donald Trump didn’t intend to go after pot businesses operating legally in states that had eased restrictions. That led to a surge in hedge funds getting involved in the industry, according to George Allen, president of Acreage.

Some states require that companies selling pot also grow and distribute it, and particularly on the East Coast there have only been a limited numbers of licenses handed out. That could all change if marijuana gets a federal nod, but for the moment it’s a big part of the appeal of investing in companies like Curaleaf.

The company aims to become the largest cannabis retailer in the U.S., according to Chief Executive Officer Joe Lusardi. He argues that pot, even if it’s federally legal, will likely be sold in specialty shops, rather than grocery stores or on Amazon.com Inc. -- meaning a retail presence will be important in the industry. Curaleaf, like its competitors, is also developing house brands that will be used to market edibles, vape pens, weed and other products, many of which aren’t yet legal in Canada. He’s frustrated that the company’s stock gets lumped in with Canadian competitors.

“I don’t think we should be correlated with the Canadian stocks at all,” he said. “In many cases they’re just growers.”

--With assistance from Doug Alexander and Jonathan Roeder