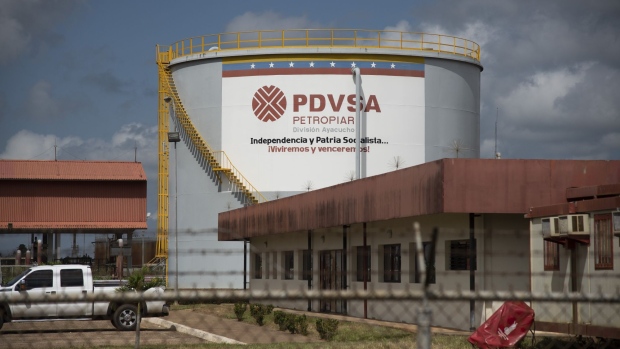 (Bloomberg) -- In the latest desperate attempt to deal with fuel shortages that have crippled Venezuela’s economy, government leaders are trying to repurpose two massive oil upgraders to make a main ingredient for gasoline instead.

With U.S. sanctions preventing the country from importing naphtha, a petroleum product its refineries use as feedstock, state-owned Petroleos de Venezuela will seek to make its own at upgraders designed to process heavy crude into lighter oil for the international market, according to documents seen by Bloomberg and people with knowledge of the plan, who asked not to be named because the information isn’t public. The plants are the Petropiar partnership with Chevron Corp. and the Petrocedeno venture with Total SE and Equinor ASA.

Venezuela’s acute fuel shortage has forced businesses and factories to shut, while drivers line up for hours or even days to fill up. The conversion of the Hugo Chavez-era crude upgraders marks another dramatic departure from a time when the OPEC-founding nation was a top oil exporter, now reduced to one of the poorest nations in the Western Hemisphere under the U.S.-sanctioned Nicolas Maduro regime.

The work at the Petropiar and Petrocedeno plants, which strip away sulfur and other impurities from the sludgy heavy crude from the Orinoco Belt, started in April, the people said.

It’s unclear how PDVSA can pull the overhaul off without the help of foreign partners or international contractors, which can no longer do business with the battered, cash-strapped state oil producer. The company has struggled to even perform basic maintenance at its plants, which lack replacement parts it hasn’t been able to import.

PDVSA, Chevron and Total didn’t immediately reply to requests for comment. A representative from Equinor deferred any questions to PDVSA.

Refineries typically make their own heavy naphtha as a stage in the processing of crude into gasoline. PDVSA units have long lost that ability because of broken equipment. The country’s upgraders are in better shape because they were operated with the help of foreign partners until recently. Plus, the processing of heavy oil into so-called synthetic crude at the plants already involved some naphtha production.

To convert the upgraders into feedstock suppliers for refineries, which will involve installing new equipment and pipelines, PDVSA is hiring local contractors, the people said. The overhaul will not prevent the plants from also being used for their original purpose of making synthetic crude.

The plants will initially feed PDVSA’s Cardon and Puerto La Cruz refineries with 30,000 barrels a day of heavy naphtha, the documents show. A plan to lay pipelines that will allow supplies to reach 112,000 barrels a day are still being discussed with contractors, the people said.

It’s not the first time the upgraders have been repurposed since U.S. sanctions have practically shut off Venezuela from the international crude market.PDVSA’s four upgraders were converted into simpler blending plants in mid-2019. The shift meant halting the production of the Petrozuata and Zuata Sweet light-oil blends to focus on Merey 16 heavy oil, mostly sold on the Asian market.