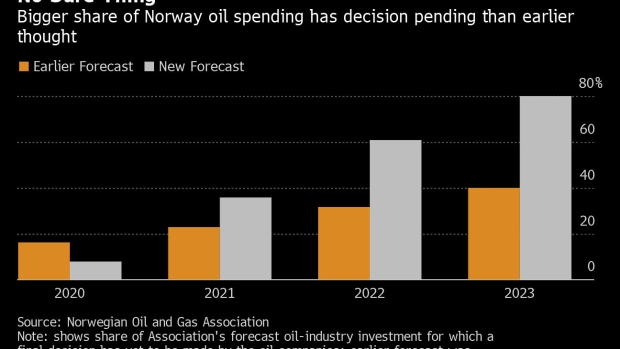 The riser platform stands on the Johan Sverdrup oil field off the coast of Norway in the North Sea, on Tuesday, Dec. 3, 2019. Sverdrup's earlier-than-expected start in October broke a long trend of underperformance for Norway's overall oil production. Photographer: Carina Johansen/Bloomberg , Bloomberg

(Bloomberg) -- Some of the most powerful people in Norway’s vast oil industry are increasingly worried about what they see as a lack of nuance in the criticism of fossil fuels.

Karl Eirik Schjott-Pedersen, the head of the country’s oil lobby, warns that the “intense” nature of the debate creates risks for a sector that Norway relies on for its stunning wealth.

The Norwegian Oil and Gas Association, as the lobby is known, on Thursday gave a sense of what’s at stake. It estimates that $37 billion in oil investments over the next five years is up in the air, if oil companies hesitate to commit. That’s more than previously estimated.

In high-cost Norway, stable oil policies, including taxes, exploration incentives and license awards, have been an important selling point. Some of those investments will disappear if uncertainty around the industry’s future grows, Schjott-Pedersen said.

“We’re hearing a public debate that raises questions about the framework conditions, and the public debate has become more intense,” he said. “Since we’re seeing an increasing share of estimated investments that haven’t been sanctioned, they are vulnerable to a change in framework conditions and that could lead to some being canceled. That strengthens the importance of stability.”

Schjott-Pedersen is renewing industry warnings as the political tide shifts. This year, the Labor Party -- the biggest political group -- withdrew its support for drilling in one of Norway’s most environmentally sensitive areas. Meanwhile, oil workers have complained about the stigma they feel as their industry gets hit by “shaming.”

But fossil fuels are the lifeblood of the Norwegian economy. The country is western Europe’s biggest producer of oil and gas, which make up about half of its exports. The industry employs almost 200,000 people.

Recently, Swedish youth activist Greta Thunberg lashed out at Norway’s status as a petro-state and demanded that the country phase out its oil production.

Schjott-Pedersen says that to do so would lead to higher emissions globally. That’s because Norway has lower emissions in the output phase than other nations. What’s more, Norway’s lighter oil makes for less-polluting products, he said.

“Thunberg is right that we need to reduce emissions. She’s also right that oil will be less important in the energy mix going forward,” he said. “She’s wrong in saying that we need to stop oil and gas production in order to reach the Paris goals.”

To contact the editors responsible for this story: Tasneem Hanfi Brögger at tbrogger@bloomberg.net, Stephen Treloar