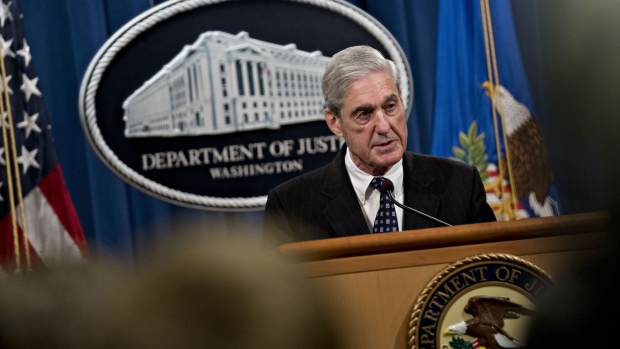 Robert Mueller speaks at the DOJ on May 29. , Andrew Harrer/Bloomberg

Robert Mueller has vowed he won’t go beyond what he’s already written about Russia, Donald Trump and obstruction of justice when he testifies on Wednesday, but there’s a lot at stake in how much -- or how little -- he brings to life the dry specifics of his 448-page report.

The former special counsel is scheduled to testify for a total of five hours before two Democratic-led U.S. House panels -- the Judiciary Committee from 8:30 a.m. to 11:30 a.m. Washington time and the smaller Intelligence Committee from noon to 2 p.m.

Here are some of the potential risks that the nationally televised hearings pose for the main actors:

Mueller can be expected to contradict Trump’s frequent -- and erroneous -- claim that he found “no collusion, no obstruction.” In fact, Mueller found that people in the Trump campaign had many contacts with Russians and openly sought their assistance. But he said there was insufficient evidence to conclude that those around Trump conspired in Russia’s interference in the 2016 presidential election.

Mueller also documented at least 10 alleged acts by Trump to obstruct justice and said he couldn’t exonerate the president on the obstruction issue. Democrats will push him to elaborate on what some read as a pointed hint in his report that Congress has the authority to act.

Trump, who acknowledged Monday that “probably, I’ll see a little” of Mueller’s testimony, repeated that the special counsel found “no collusion, no obstruction.” He said “the Democrats were devastated by it. They went crazy.”

Democrats argue that even a dry recital by Mueller of his key findings would bring fresh attention to a report so long and dense that few Americans have actually read it. There’s a chance, however, that most Americans have already made their judgments about Russian meddling and Trump and have moved on.

On the other hand, Mueller may provide fresh momentum for congressional Democrats to open proceedings to impeach the president. Impeachment is an option that House Speaker Nancy Pelosi has resisted so far because of her belief it would prove futile, and politically damaging to her party, unless dramatic new evidence emerges that would lead to Trump’s removal from office by the Republican-controlled Senate.

And with every member of both committees getting a few minutes to question Mueller, there’s always the possibility that the hearings could generate more speechifying by lawmakers than illumination by their star witness.

Republicans Must Choose -- Combative or Nice

Republicans head into the hearings with no certainty whether to regard Mueller, a former FBI director, as a witness who won’t venture beyond the careful wording of his report -- or as an adversary who may give Democrats new material to use against the president.

Yet if the Republicans aggressively challenge Mueller, that could make him come off as a determined and principled prosecutor standing up against the president.

The Republicans also could contradict themselves if they pursue both of the themes frequently embraced by Trump and his allies -- that the Mueller investigation is old news that’s best forgotten, and that it should be subjected to further inquiries over allegations of of anti-Trump bias in the FBI and Justice Department.

Mueller May Have to Defend His Decisions

Mueller risks damaging his reputation as a no-nonsense professional if he lets himself be goaded into prickly or evasive responses. On Monday, the Justice Department told him in a letter that his public testimony should hew to the boundaries of his report.

He also may be pressed about decisions he made during the Russia probe -- including that Justice Department rules prohibited him from reaching a conclusion on whether Trump obstructed justice and his willingness to close the inquiry without forcing the president to answer questions in person.

If Republicans decide to go after him, Mueller could also face scrutiny over Trump’s assertion that his legal team was dominated by Democrats.

Barr May Be Hurt by Differences With Mueller

Attorney General William Barr’s reputation could be vulnerable if Mueller provides evidence for the Democrats’ contention that he’s been acting like Trump’s personal defense lawyer rather than the nation’s No. 1 law enforcement official.

Mueller is likely to be asked about a letter he wrote in March complaining that a summary of the special counsel’s report released by Barr “did not fully capture the context, nature, and substance of this office’s work and conclusion.” Barr later dismissed the complaint as “a bit snitty.”

Some FBI officials worry the hearings could expose sensitive information about bureau operations, such as sources and methods. Republicans might press Mueller to explain whether the FBI improperly used confidential informants to “spy on” Trump campaign officials, as Barr put it. While Mueller isn’t expected to discuss the matter, the prospect of such questions concerns some officials.