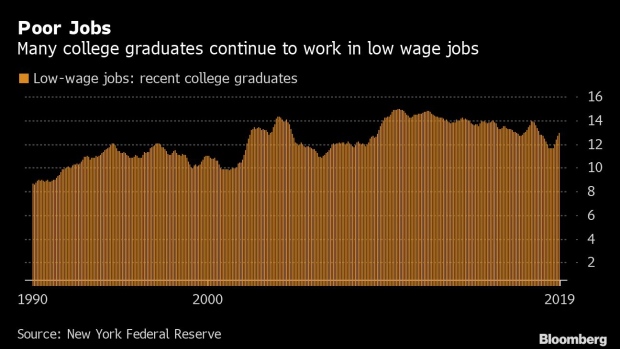 (Bloomberg) -- Millions of Americans are seeing little return from their expensive college degrees -- even in today’s hot jobs market.

For the first time in decades, recent college graduates are more likely to be out of work than the population as a whole, according to the New York Federal Reserve. And for the lower-earning half of college grads, the wage premium is shrinking fast.

Unemployment among Americans aged between 22 and 27 who recently earned a Bachelor’s degree or higher was 3.9% in December -- about 0.3 percentage point above the rate for all workers.

It’s another worrying sign for a generation that borrowed record amounts of money to get through higher education, as the cost of tuition soared. America’s $1.6 trillion in student debt is weighing on the economy and spurring politicians to offer fixes that range from targeted aid to across-the-board forgiveness.

The strong job market should be helping graduates to pay what they owe -- and at the top end of the wage scale, it is. But in recent years, while high-school graduates have seen a sharp pickup in earnings, the lower-earning half of college graduates haven’t -- and the gap between them is now the smallest in 15 years.

More than four in 10 recent graduates are working in jobs that don’t usually require a college degree, the New York Fed says. And roughly one in eight is working in a field where typical pay is around $25,000 a year or less.

The economy is creating a lot of jobs like that -- and it’s expected to create even more. In the occupations that are forecast to grow fastest over the next decade, according to the Bureau of Labor Statistics -- from home care to restaurant cooks -- typical salaries range from $24,000 to $26,500.

Part of the problem is that the jobs market is saturated with degree-holders, while tight labor conditions have ramped up demand for a different kind of skills -- bringing benefits to electricians and plumbers, for example.

Those workers still have plenty of ground to make up. Pay for Americans who only have high-school qualifications has been in long-term decline -- and even after the gains of recent years, they earn less than they did in 1990.

Meanwhile, better-off college graduates have been the big winners over the past 30 years -- even if their gains have flattened out lately. But the bottom half of college grads have been losers in both the short and the long run.

That’s likely the group that is having the most trouble paying back the money they borrowed to go to college -- and they might be engaged in that struggle all through their working lives. Already, 5% of student debt is held by seniors, and the figure has been steadily rising.

To contact the editors responsible for this story: Sarah McGregor at smcgregor5@bloomberg.net, Ben Holland