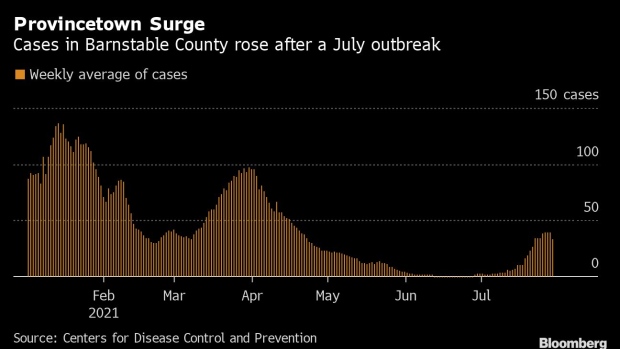 Danny Barefoot and 23 friends traveled to Provincetown, Massachusetts, to dine, hit the beach and party, secure in the knowledge they were all fully vaccinated.

They tested positive for Covid-19 after a week-long Independence Day getaway -- none badly ill, but all shocked by how the virus ambushed them, according to interviews with four who got sick. Health investigators are scrutinizing discrete outbreaks like this one, fanned across four cottages blocks off the ocean, in hopes of demystifying the delta variant.

“I understood I wasn’t at zero risk, but I didn’t think there was the possibility of it spreading so quickly among vaccinated people,” said Barefoot, a 33-year-old Washington lawyer who developed mild symptoms during the trip. “As soon as I got home, I went to taste a piece of candy and I had no taste.”

Delta’s spread in Provincetown was the focus of a study released Friday by the U.S. Centers for Disease Control and Prevention, and contributed to the agency’s recommendation that fully vaccinated people return to wearing masks indoors in areas of high transmission.

The Provincetown cluster includes more than 900 cases. No one has died, and only seven people have been hospitalized, because vaccines remain effective at restraining the virus’s rampage in the body. But the cluster’s rapid growth is provoking concern about delta’s talent for turning even vaccinated people into spreaders.

Contact tracers have interviewed Barefoot and his friends to learn where they went and whom they came across while they were on Cape Cod, and whether their confidence in vaccines had been shaken. Such intelligence is already shifting national policy and raising questions about how best to fight the virus amid gatherings like Chicago’s 100,000-person-per-day Lollapalooza music festival this weekend and the massive Sturgis motorcycle rally that begins next week in South Dakota.

In Provincetown, vaccination was nearly universal by early July, with the state’s highest rate. Surrounding Barnstable County had some days with no detected Covid cases.

Accounts from infected residents and guests begin with a happy sense of post-pandemic release. Jubilant crowds packed the longtime gay gathering place around July 4, said Bob Sanborn, executive director of the Provincetown Business Guild. “People wanted to reclaim their lives after losing them for a year or so,” he said. “They were emboldened.”

Genetic analysis of hundreds of outbreak samples suggests that Barefoot’s group could have been exposed in multiple venues.

“There was no ‘Patient Zero,’” said Daniel Park, senior group leader of viral computational genomics at the Broad Institute in Cambridge, Massachusetts, which is analyzing the Provincetown cluster samples.

“This was not actually a singular superspreader event,” he said. “It was multiple events. You could kind of tell that some of them were bigger than others, but there was no one event -- no one bar, no one club. There were many things all going on at the same time.”

In June, daily cases in surrounding Barnstable County were in the single digits. By mid-July, there were dozens.

When Howard Bragman, a Los Angeles crisis public-relations practitioner, arrived July 14, news was spreading about the outbreak, and he kept his circle small. His house hosted just three people, he didn’t attend any clubs or parties, and he never dined indoors.

“I was being pretty cautious; I wasn’t a saint, but I was pretty good,” Bragman said. He flew home Monday, July 19. That Wednesday, he was exhausted with a slight fever, and soon lost his sense of taste and smell.

He posted an Instagram selfie in bed with the caption, “I brought home the one souvenir from Provincetown NOBODY wants! #covid_19 #deltavariant”.

In mid-July, health authorities asked the Broad Institute to speed up its testing of Provincetown samples. Fears were rising that the explosive spread could indicate a ferocious new variant. But analysis found that it was overwhelmingly the all-too-familiar delta.

“The devil you know turned out to be even a little stronger than we thought,” Park said. Unmasked interactions among vaccinated people might have been safe enough with the original alpha Covid strain, he said, “but maybe we can’t get away with them now.”

Case in point: Nathaniel Teichman, 34, a New York City startup manager who has spent much of the pandemic on Cape Cod. He went to a friend’s house party the weekend of July 10. The 30 or so people there were all vaccinated.

Five soon tested positive for Covid, including Teichman. The other four had been out to bars in the days before the party, so “our assumption is they got it in Provincetown,” Teichman said. “I was the only one who got it at the party.”

All recovered quickly, but such cases, in which vaccinated people apparently not only caught the virus but passed it on, are the focus of concern.

“The crux of the problem of how we’re going to get back to normality right now centers around the question: Do vaccinated people transmit the virus, and to what degree?” said Harvard University’s Deborah Hung, director of the infectious disease and microbiome program at the Broad Institute.

The crux of the crux is whether even vaccinated people with no symptoms can transmit the virus, she added. How safe are you, really? Just how careful do you have to be?

Tom Doyle, a Wakefield, Massachusetts, retiree who visited Provincetown for three days ending July 23, thought he was appropriately wary. Fully vaccinated, he wore a mask in stores, and dined out just three times, only once indoors. No clubs. No parties.

“I honestly believed I could go down and if I’m careful, it won’t be an issue,” he said.

Bloomberg has gathered data from 35 states and identified 111,748 vaccine breakthrough cases through the end of July. Health authorities emphasize that they don’t mean vaccines are ineffective. All vaccines are imperfect, they say, and the Provincetown data show vaccines limit serious illness and death. The lack of serious illness among Barefoot’s group is a testament to inoculation, those interviewed said.

Tim Wilson, a Washington lawyer, felt as though he had a cold when he returned home July 11. His husband, who traveled with him, skirted infection entirely. They visited a separate group of fully vaccinated friends in Boston on the way home and none became sick.

“The message should not be one of panic, but one of rededication to getting everyone vaccinated,” Wilson said.

Bragman agreed, and said the gay community, scarred by the plague of AIDS, understands intuitively how public health is about caring for friends, neighbors and ultimately all Americans.

“As a gay man who’s lived through too many epidemics now, I’ve learned it’s about personal responsibility,” Bragman said. “It’s about how do we collectively stop other people from getting the disease.”