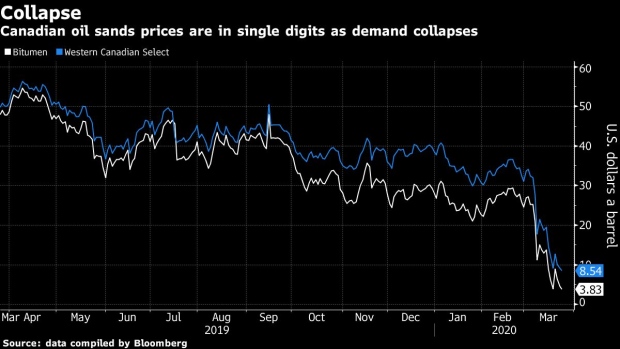 Heavy haulers dump oil sand into a hopper during a grand opening event for the Suncor Fort Hills oil-sands extraction site near Fort McKay, Alberta, Canada, on Monday, Sept. 10, 2018. New technologies such as driverless trucks and froth-treatments that eliminate the need for multibillion-dollar upgraders -- along with U.S. benchmark crude prices closer to $70 -- are helping make the industry profitable again. Photographer: Ben Nelms/Bloomberg , Bloomberg

(Bloomberg) -- Record low prices for heavy Canadian crude have prompted one of the biggest operators in the oil sands to take the rare step of shutting production.

Motivated by the “extremely low” prices, Suncor Energy Inc. announced on Tuesday that it will shut in one of its two so-called trains at its two-year-old, 194,000 barrel a day Fort Hills oil sands mine. The company also is delaying the start up of its MacKay River oil sands wells to May, after operations were halted in December because of a malfunction and fire.

The move comes as the coronavirus pandemic slashes worldwide oil demand just as Saudi Arabia ramps up oil production in a price war with Russia, sending global oil benchmarks to the lowest prices in almost two decades. Western Canadian Select, the oil-sands benchmark, fell to $8.54 a barrel, which will be a record low if it settles at this price, data compiled by Bloomberg show. The value of the bitumen itself, excluding the light condensate that’s added so the heavy crude can be pumped through pipelines, was valued at just $3.83 a barrel.

Oil sands wells and mines are built for billions of dollars to last for decades. They are rarely shut because many of their operating costs are fixed and, for the wells, leaving the reservoirs cold for an extended period of time could cause damage. Suncor and its partners Total SA and Teck Resources Ltd. agreed to operate the single processing stream at Fort Hills at full utilization to increase cash flow amid the low prices for bitumen.

“Unit costs for the remaining production will be higher because of this decision as a result of fixed costs being covered by lower volumes,” the company said in its release.