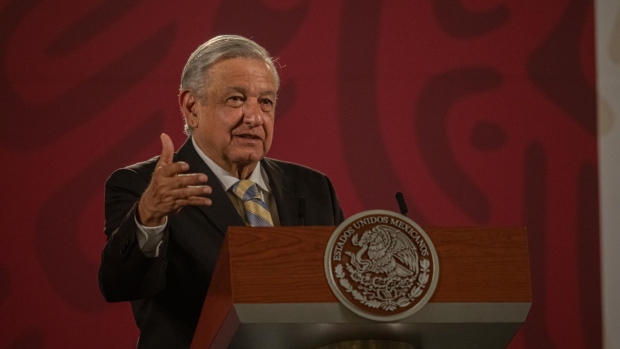 Andres Manuel Lopez Obrador, Mexico's president, speaks during a news conference at the National Palace in Mexico City, Mexico, on Thursday, Sep. 17, 2020. President Lopez Obrador said he won't confront the U.S. after a memo by the White House stated that Mexico must do more to fight the drug trade. , Bloomberg

(Bloomberg) -- President Andres Manuel Lopez Obrador is asking Mexicans to decide whether his five predecessors should be investigated for wrongdoing, part of an effort to retain his anti-graft credentials and rally his support base, even though the vote’s results are likely to be toothless.

Supporters of that idea have placed posters around the country depicting fake mug shots of the five former presidents, but Sunday’s national referendum is set up for a feeble outcome. The ballot asks voters a murky question -- whether they want “a process of clarifying the political decisions of years past by political actors” -- and not enough of the electorate is expected to turn out for the outcome to count.

And even if enough Mexicans, some 37 million at least, show up and vote, it will not on its own lead to criminal charges against the ex-presidents. Polling stations open at 8 a.m. in Mexico and close at 6 p.m. It may take some 48 hours to count all the ballots.

“The result does not require any judicial body to process, bring charges against, or incarcerate any ex-politician automatically,” said Jacobo Dayan, a professor of international criminal law at the Universidad Iberoamericana. “There’s not a real effort to hold people accountable, but it’s important for the president to keep up his narrative about good versus evil.”

AMLO, as the president is known, champions referendums as tools of what he calls “participatory democracy.” This will be the first national vote since a 2019 reform explicitly gave citizens the right to be consulted on issues of national importance, including revoking the mandate of the president. Next year AMLO intends to test the referendum method by asking Mexicans to vote on whether he should stay in power.

The Supreme Court rejected arguments that Sunday’s vote would violate due process and the presumption of innocence, but past referendums in Mexico have been controversial.

The biggest vote, to cancel a partially-completed airport project near Mexico City in 2018, was organized by Lopez Obrador’s own party before his inauguration and had only 1.07 million participants out of 90 million eligible voters. Other local votes on whether to build a train through southern Mexico and to finish a half-constructed power plant were marred by accusations of impropriety.

By law, 40% of the electorate would have to vote Sunday for the decision to be binding for the executive and legislative branches, but a phone poll published Wednesday showed that even though 77% of Mexicans surveyed would vote in favor on Sunday, only 31% were “very” interested in participating.

When asked about the possibility of lackluster turnout, AMLO said at a press conference on July 27 that a public vote is important anyway because “people want democracy, participatory democracy, not just representation, not just going to vote every three years.”

National referendums have been used for other major decisions in Latin America. Colombia voted not to ratify an initial peace agreement between the government and a long-standing rebel group in 2016, and Chileans voted to reform their constitution in 2020.

It’s not just AMLO’s political base who wants the referendum -- some Mexicans see it as a form of catharsis in the absence of justice for alleged state crimes.

Over 2 million people signed a petition last year in favor of investigating the former presidents for events carried out on their watch, and supporters include those advocating for victims of the 1995 FOBAPROA bank bailout gone awry, the 2006 police repression of protesters in San Salvador Atenco, the ongoing militarized drug war, and the 2014 disappearance of a group of students from the Ayotzinapa Rural Teachers’ College.

“It’s not about one mayor, one ex-president,” said Alina Duarte, a journalist and YouTuber who traveled around the country to rally voters. “It’s about getting closer to guaranteeing justice to all of the victims.”

Mexico’s current question mentions potential victims’ rights, but lacks a specific mechanism, such as a truth and reconciliation commission. And any crimes theoretically committed prior to the presidency of Felipe Calderon, who took office in 2006, are beyond the statute of limitations, Santiago Nieto, the director of Mexico’s Financial Intelligence Unit, said in October of last year.

“Clearly it’s not just about those five men,” said Gema Kloppe-Santamaria, a professor of Latin American history at Loyola University Chicago. “It’s about the whole apparatus that allowed this. The question should be about strengthening the investigative capacities of the Mexican state and identifying all the legal loopholes that allowed for these abuses to happen.”