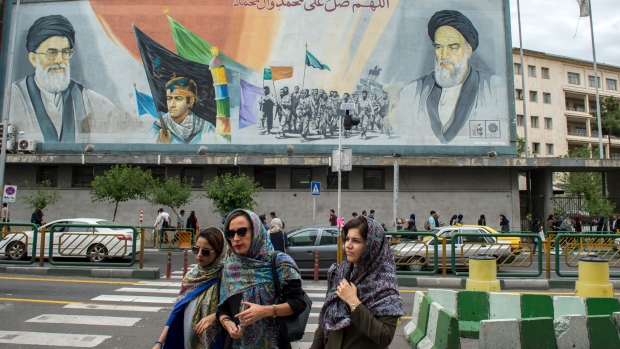 (Bloomberg) -- In the Motahari commercial district of central Tehran, Mohammad Mohammadzadeh is more concerned about soaring prices than the threat of war with America.

Folding a pile of documents in his empty printing shop, Mohammadzadeh lists the challenges facing his business, including a 10-fold increase in the cost of ink cartridges, and bemoans the lack of help from Iran’s government. He regards the deteriorating state of relations with the U.S. with wearied resignation.

“The U.S. just talks and talks and their words are meaningless now,” he said, as heavy traffic crawled past the banks, government offices and car showrooms lining the congested boulevard outside. “What can America do that they haven’t done before? They’ve been doing this sort of thing for 40 years.”

President Donald Trump and Iran’s Supreme Leader Ayatollah Ali Khamenei both say that war is not on the horizon. But with no immediate prospect of talks and lacking any obvious back channels of communication, the void is filled by a history of mutual enmity.

The U.S. has chosen “bullying and force” in its approach to Iran rather than engaging with respect, said Diako Hosseini, director of the world studies program at the Center for Strategic Studies in Tehran, which is affiliated with Iran’s presidential office. “This approach won’t yield results and can bring the situation close to a dangerous juncture.”

Breaking out of the cycle of antipathy is all the harder because Iran is unsure of Trump’s endgame -- Iranian concessions or regime change -- and has declined to heed U.S. calls to come to the negotiating table under duress. Tehran will take Trump’s calls for dialogue seriously “when it becomes clear who it is that Iran’s speaking to and to which U.S. policy it needs to respond,” said Hosseini.

The sense of a dangerous drift is being compounded by volleys of belligerent rhetoric lobbed from both sides. An adviser to Iranian President Hassan Rouhani, Hesameddin Ashena, taunted Trump on Twitter with the prospect of war, adding an apparent reference to National Security Adviser John Bolton, regarded as a leading Iran hawk.

In Washington the same day, Trump said that he’d send “a hell of a lot more” than 120,000 troops to the Middle East in the event of hostilities, in the same breath rejecting as “fake news” a report that his administration was planning for war.

Amid the saber-rattling, there are confused signs on the ground, whether real or intended to raise pressure. The State Department told all “non-emergency U.S. government employees” to leave Iran’s neighbor Iraq on Wednesday. The order came after the White House expedited the planned deployment of the USS Abraham Lincoln Carrier Strike Group to the Middle East in response to what it called “troubling and escalatory indications and warnings” from Iran.

That version of events was contradicted by the U.K. deputy commander of the anti-Islamic State coalition, Major General Chris Ghika, who told reporters at the Pentagon there was “no increased threat from Iranian-backed forces in Iraq and Syria.” U.S. Central Command responded with a statement disputing the allied commander’s remarks.

Trump triggered the impasse last year when he withdrew from the 2015 nuclear accord with Iran despite personal lobbying by German Chancellor Angela Merkel and French President Emmanuel Macron. The U.S. reintroduced sanctions on Iran, sending the economy and rial currency into a tail spin and prices of basic goods surging beyond the reach of many.

It also warned Europe against trying to preserve the accord, imposing secondary sanctions to punish companies doing business with Tehran. That has left European signatories Germany, France and the U.K. frustrated with Washington, squeezed by Iran and with little room to act as intermediaries to ratchet back tensions.

German Deputy Foreign Minister Niels Annen used a speech in Berlin on Wednesday to blast the U.S. position as “short-term and inconsiderate of interests of some of its closest partners.”

Trump has said he’s willing to talk to Iranian leaders, including telling them last week to “call me,” but Iran insists negotiations are only possible after the U.S. has returned to the nuclear deal.

The accord “complies with the expectations that the American president recently mentioned -- that Iran doesn’t attempt to seek nuclear weapons,” Iran’s Vice President Masoumeh Ebtekar said in an interview in Tehran. “If they go back to the original position that they had at the beginning of their government then yes, it can be considered.”

Two attacks on Saudi oil infrastructure in three days have only heightened the sense of confusion. On Tuesday, a rebel group in Yemen that’s backed by Iran claimed responsibility for drone attacks that targeted two pumping stations in Saudi Arabia. That came two days after the United Arab Emirates said four ships were damaged in an unexplained incident near the Strait of Hormuz, the world’s most important choke point for oil shipments.

One undeniable reality is the impact of U.S. sanctions, including on Iranian oil. The Trump administration sought to keep up the pressure by announcing fresh measures this month targeting Iran’s copper, iron, steel and aluminum sectors. The International Energy Agency forecast that crude production in Iran, the fifth-largest OPEC member, could fall in May to the lowest since the Iran-Iraq war of the 1980s.

That’s a reminder to Tehran of the Reagan administration’s backing for Saddam Hussein in his eight-year war against Iran. More than 1 million died on both sides in the conflict, some as a result of exposure to chemical weapons used by Saddam against Iranian urban centers and troops.

For Iran, it’s one example of the long-term hostility the U.S. has shown the Islamic Republic, going back as far as the CIA-supported 1953 coup that toppled democratically elected Prime Minister Mohammed Mossadegh and installed Shah Mohammed Reza Pahlavi. The Shah was ousted in the 1979 revolution in a multi-party political revolt that ultimately created the current Islamic regime in Tehran.

For the U.S. administration, including Trump and his advisers, there is a deep suspicion of Iranian behavior, grounded in the 1979 hostage crisis when Iranian students took 52 American diplomats captive and held them for 444 days in Tehran.

The Carter administration formally cut ties with Iran and put it under economic embargo in April 1980. Weeks later, a U.S. military effort to free the hostages failed after a helicopter used in the operation collided with a transport plane, killing eight American servicemen and an Iranian civilian. Two other helicopters suffered mechanical defects. Official relations have never been restored.

Trump’s predecessor, President Barack Obama, sought to constrain Iran’s nuclear program by persuading the country to change its policies through strengthening its links with the outside world, culminating in the nuclear accord. Trump abandoned it as a “horrible” deal.

“The Iranians have for decades believed that the United States wanted regime change,” said James M. Dorsey, senior fellow at Singapore’s S. Rajaratnam School of International Studies and its Middle East Institute. “The nuclear agreement appeared to suggest that an accommodation may be possible. Trump is a return to square one.”

In Tehran, Maryam, who didn’t want to give her surname because of the sensitivities of speaking with foreign media, sat behind a desk working on the accounts of a small marketing firm. She said her “real fear” is that the economic situation deteriorates to the extent that Iran shares Venezuela’s fate. She isn’t worried about war, citing European and Russian efforts to prevent it, and is instead holding out for talks.

“They might be convinced that they need to sit down and talk, not over the nuclear deal but just over these current tensions,” she said. “In terms of how bad things are now between the two countries, they need to talk.”