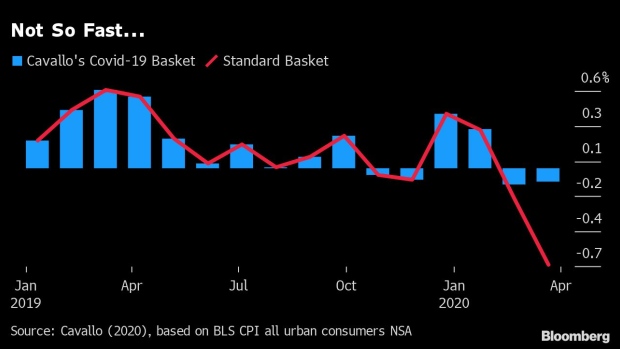 Shoppers wear protective masks at a mall in Dallas on May 4. Photographer: Cooper Neill/Bloomberg , Bloomberg

(Bloomberg) -- Inflation is one of the great question marks of the coronavirus era, with some economists predicting it’s poised to take off and others warning of a deflationary slump.

For the technicians of inflation, there’s a more immediate challenge: how to measure it properly. Right now, the cost of lockdown living is higher than headline gauges suggest.The broadest price measures are based on a “basket” of the goods and services that consumers typically spend their money on. And that basket has gotten cheaper during the pandemic. In the U.S., for example, the main price gauge posted its biggest month-to-month drop for more than a decade in April.

The problem, according to Alberto Cavallo -– an associate professor at the Harvard Business School who specializes in inflation –- is that “the basket for a typical consumer during lockdown is very different.”With swaths of the economy shut down, some goods and services, such as restaurant meals or hotel rooms, are barely available at all. Others are temporarily out of favor, like gasoline as car travel dropped. Some may be available at bargain-basement prices: plane tickets, say, at a time when few want to fly.In each case, people aren’t buying nearly as much of this stuff as they used to –- but when it comes to measuring the inflation rate, the items count for just as much as they did pre-virus. They still have the same weighting in the basket, in other words.When you measure the prices of the things Americans are in fact spending money on, “it turns out that the actual inflation rate is not as low,” says Cavallo, the co-founder of the Billion Prices Project, a global initiative to keep track of online prices. He has constructed a basket for the Covid-19 economy.

It shows that prices did fall last month -– but not as much as the headline numbers suggest. “The reason is that, on average, people are now consuming relatively more in categories that are experiencing higher inflation,” he says. Meat prices, for example, have jumped as the epidemic disrupted supply chains.These kinds of measurement issues aren’t academic: They can directly affect living standards and contribute to income inequality. Americans who rely on Social Security benefits get a cost-of-living adjustment to their payments every year, based off headline inflation measures.If consumers quickly return to their pre-virus habits as the economy reopens, the gap in inflation may prove to be a blip. But if some shifts are permanent, it could take years before official measures adjust.The Bureau of Labor Statistics reassesses its consumer-price basket each year based on a wealth of data. Thousands of Americans help out, by keeping diaries that list everything they buy.The catch is that this happens with a lag of at least two years. That’s not a big problem in normal circumstances, because consumer behavior tends to change fairly slowly. But some of this year’s shifts -– from eating out to eating at home, for example -- have been dramatic.

“We definitely need better real-time data, not just on prices, but on consumer-expenditure shares as well,” Cavallo says.The pandemic has raised other difficulties for the price watchdogs.For a start, the BLS had to stop sending its data collectors into stores -– where most transactions still occur, even under lockdown. As of March 19, it’s been relying on phone calls and emails instead.

That means “they’re getting a smaller subset,” said Randal Verbrugge, an economist at the Federal Reserve Bank of Cleveland’s Center for Inflation Research. “It can’t be good for accuracy.”

With the Department of Labor closed, employees are collecting data from home instead of in their offices. Usually processing errors are minimal. But the upheaval is putting statisticians under pressure like everyone else -– as glitches in jobs data this month have illustrated.It’s not unusual, of course, for some prices to jump around. Policy makers who rely on such data, including central bankers, often look at measures of so-called core inflation, which strip away volatile items such as food.

The Cleveland Fed has developed measures that go even further in removing outliers, in order to provide a better signal of the underlying inflation trend. One gauge looks at whatever is in the middle of the distribution of price changes. Another cuts out about 8% of items at either end.There are workarounds for other virus-era dilemmas, too. If some items just aren’t available to purchase, for example, the technicians in charge of producing inflation data can find others and use them as a substitute.It’s not ideal, according to Verbrugge at the Cleveland Fed, but “the procedures weren’t built with an epidemic in mind.”