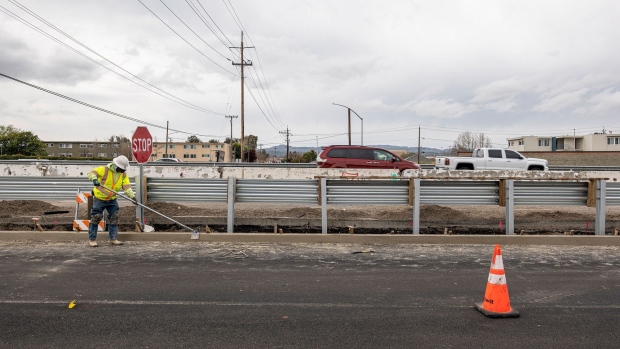 A contractor works on a road under repair along Highway 101 in San Mateo, California, U.S., on Wednesday, March 17, 2021. The centerpiece of President Biden's next big priority after pandemic relief, a massive transportation infrastructure package, could move through a key Senate committee by the end of May according to the chair of the Environment and Public Works panel. Photographer: David Paul Morris/Bloomberg , Bloomberg

(Bloomberg) -- In the $4 trillion municipal-bond bazaar, it would be unwise to pay the quoted offer price.

Quoted prices for municipal bond offerings are on average 15 basis points higher than when a dealer subsequently buys them, according to a BondWave analysis of more than 400,000 municipal bonds that were offered on an electronic platform and then traded.

And the bigger the block of bonds, the more room you have to haggle. The study found that the offering price of a block of $5 million or more investment grade bonds was 41 basis points higher than the actual trade price; bonds sized $100,000 or less were offered at 14 basis points more.

Across all rating categorizes and sizes of muni bonds, the majority of dealer buys, 56.8%, occurred at prices better than the quote, while 30.4% of trades were at the same price, according to BondWave. Almost 13% of trades were worse than the offer.

“The way to really think of an offer is an invitation to negotiate,” said Paul Daley, a managing director at BondWave, a financial technology company, and author of the report.  “It’s not like walking into the grocery story and the price on the shelf is the price you pay.”

Unlike stocks that trade on an exchange, the over-the-counter bond market doesn’t have a mechanism to aggregate quotes and calculate the highest bid price and the lowest offered price for a security. In recent years, electronic-trading platforms, or Alternative Trading Systems, have begun to post thousands of bonds for sale and help traders sort them to identify potential purchases.

The platforms, which rarely post standing bids for munis, accounted for more than 56% of all state and local debt trades between dealers from August 2016 to April 2021, according to data released by the Municipal Securities Rulemaking Board in August.

Bondwave analyzed more than 400,000 dealer-to-dealer trades last year from Jan. 1 to Aug. 31. More than 80% of the trades were of investment grade bonds with trade sizes less than $100,000 par, mirroring the dominance of retail investors in the muni market.

“With higher risk comes greater cautions when posting bids and offers,” Daley wrote in the report.