Canada in daily talks with China over meat ban, no conversations over canola: Agriculture minister

The world’s top agricultural-commodity traders have for months stuck to the mantra they’ll benefit from a deadly pig disease roiling global markets. Just how much they’ll profit depends on the location of their assets.

Success will hinge on whether the firms have plants that process soybeans into meal for pig feed in nations where meat-export demand is set to rise. That’s as China seeks more protein from overseas, with African swine fever expected to wipe out a third of its hog herd. The trade war between Washington and Beijing will also play a role, hampering U.S. meat shipments to the benefit of South America and Europe.

That’s good news for crop giant Bunge Ltd. (BG.N), which has the majority of its soy-processing assets in South America. Rival Archer-Daniels-Midland Co. may for now be hobbled by the Chicago-based company’s stake in a major soybean crusher in China, where demand for the oilseed is forecast to drop for the first time in 15 years as the pig disease spreads. 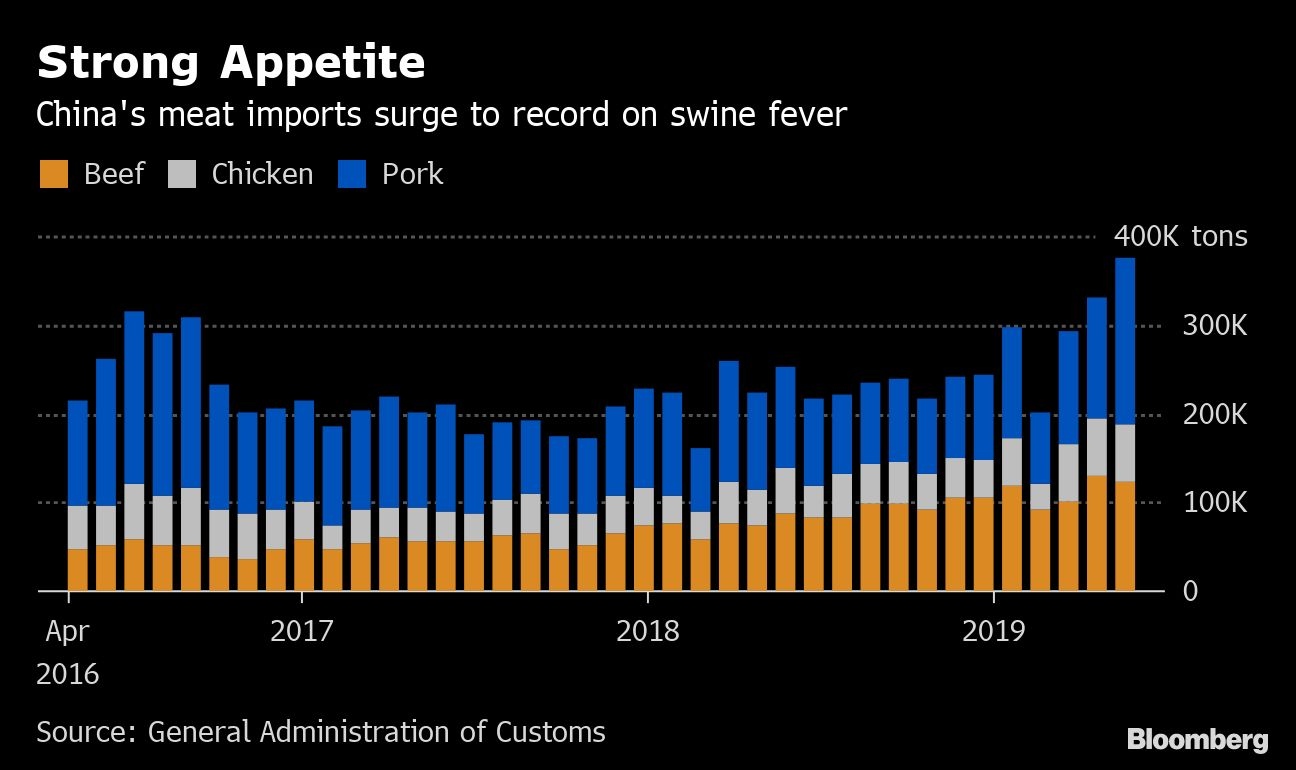 “It comes down to who the favoured trade partners are, and Brazil is best placed to supply all meats and then the EU for pork,” Will Sawyer, an animal protein economist at the US$138 billion rural lender CoBank ACB, said, referring to the areas that could export meat to China. “So in the short-term, South American soybean crush assets are favourable.”

Bunge has 33 per cent of its oilseed crushing capacity in South America, 26 per cent in Europe and 27 per cent in North America. That will help the White Plains, New York-based trader meet rising demand for animal feed in countries such as Brazil, where shares of top meat company JBS SA have almost doubled this year.

“We like the fact that only 15 per cent of our crushing is in China today,” Bunge Chief Executive Officer Greg Heckman said at the BMO conference in New York in May. “There will be fewer beans going to China. There will be more beans to crush in the rest of the world.” 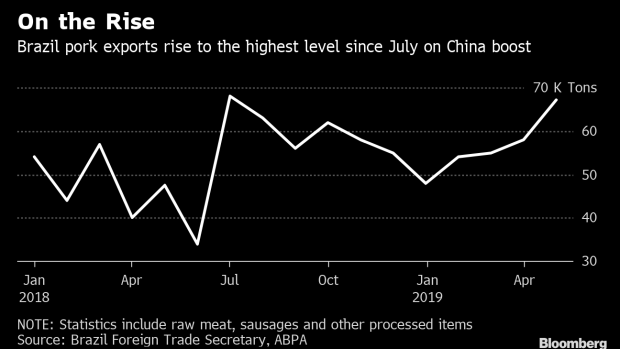 ADM, meanwhile, may take an initial hit from the disease, according to Patrick Yau, an analyst at Citigroup Inc. That’s due to its 25 per cent stake in Wilmar International Ltd., which vies with top Chinese food company Cofco Corp. for the spot of the Asian nation’s largest soybean processor.

Singapore-based Wilmar flagged negative margins and weak results from its crushing business in the quarter to March 31 due to African swine fever. Cargill Inc., the U.S.’s largest privately held firm, said earnings from animal nutrition and Chinese oilseed crushing were hit by the virus in the period ended Feb. 28.

While the U.S. would normally be one of the most competitive meat suppliers, the trade war between the administrations of Donald Trump and Xi Jinping is hurting American competitiveness as Chinese tariffs on pork are still in place, CoBank’s Sawyer said. There’s also a long-standing ban on poultry shipments.

That means America can probably only fill the gap in the global market left by other nations that are exporting to China, said Joe Sanderson, chief executive officer of Sanderson Farms Inc., the U.S.’s third-largest chicken producer.

Still, as China steps up meat imports in the months and years to come, it will need to turn to the U.S. South America alone won’t be able to fill the Asian nation’s shortfall and capacity in Europe isn’t as big. That will be a boost for companies like ADM, whose filings show that a majority of its oilseeds crushing capacity is in North America.

“As China steps up their meat imports, North American assets will also benefit,” said CoBank’s Sawyer. “And should there be an arrangement with China, the dynamics for U.S. meat producers and therefore soy meal suppliers would be very good,” he said, referring to a potential trade deal between Washington and Beijing.

Minneapolis-based Cargill said it’s well-positioned to benefit. The company has five plants in China, accounting for about 20 per cent of its total soybean crushing capacity, according to a person familiar with the matter, who asked not to be identified because the information is private. A spokeswoman for the company declined to comment on its soybean processing capacity.

“We’ve got a very well-developed asset footprint and trade flows that are designed to respond to rapid shifts in global trade,” said John Fering, managing director for Cargill’s premix and nutrition business in China. “We’ve only seen a kind of mid-single digits decline in demand in China for soybean meal until now.” The company, the U.S.’s third-largest beef producer, can also benefit from its animal protein business. 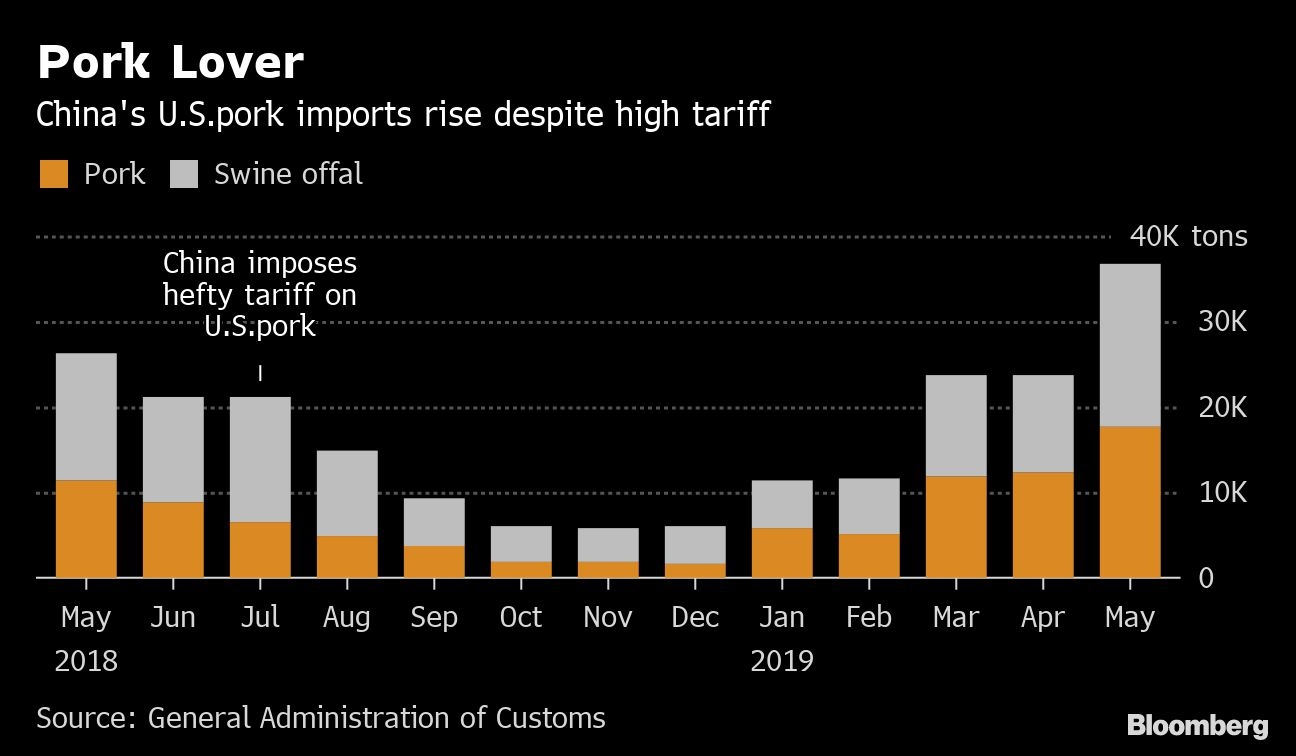 Getting rid of the disease and rebuilding the herd in a nation that consumes half the world’s pork is expected to take three to five years as the structure of China’s hog industry, with many small backyard operations, makes it almost impossible to contain the spread of the virus. But longer-term, a consolidation of the pork sector will end up benefiting crushers in the country.

“These big companies are going to be raising pigs or chicken or whatever -- they are a little bit more sophisticated and they will feed technical rations, having more soybean meal,” Juan Luciano, ADM’s chief executive officer, told the BMO conference in May. “We see the benefit into rationalization of the industry.”