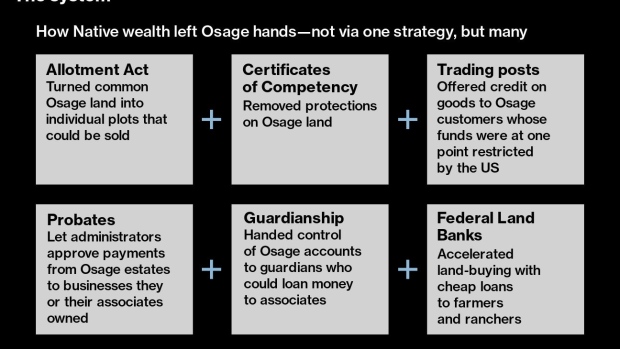 (Bloomberg) -- Listen to In Trust on iHeart, Apple Podcast, Spotify

In Trust is an investigative podcast from Bloomberg News and iHeartMedia. This is the sixth episode in the series and we encourage you to listen to the story from the beginning. Find previous episodes here. A transcript of this episode is available.

It took a long time and a lot of transactions to assemble the 130,000 acres in Osage County that various Drummond family members now hold. Three pioneering Drummond brothers bought some of it directly from Osage citizens who received parcels of land when the US divided the reservation’s surface land. But the siblings bought a lot of their land from non-Osages.

Listen to this episode.

In recordings with his biographer, Jack Drummond recalls someone who made a lucrative business out of getting Osage allotments and flipping them to ranchers. She was, in Jack’s words, a “businessman-woman” by the name of Anna Marx LaMotte.

LaMotte’s business practices brought US government scrutiny and landed her in court several times. Often, the jury — and the newspapers — gave her a sympathetic ear. The federal government finally prevailed in 1921, when a US Supreme Court ruling required LaMotte and her husband, George, to reverse many of the land deals they brokered.

The Drummond brothers’ dealings with the LaMottes went deeper than land deals. George LaMotte and Fred Gentner Drummond were founding members of the Osage County Home Owners Association, a group that formed to lobby against a bill extending the federal government’s trust relationship over the Osage Mineral Estate.

The Osage Tribal Council was successful in beating the Osage County Home Owners Association, and the trust period over the mineral estate was extended — eventually in perpetuity.

In Osage County, much of the wealth is tied to the land itself. It’s an asset that can be borrowed against, again and again, over generations. Many of those loans have come from the Federal Land Bank, which started as a way to help farmers and ranchers access cheap debt to buy more land.

In episode six, an expert on the Federal Land Bank explains how mortgages that were effectively subsidized, allowed some families to rapidly expand their holdings — but that they weren’t available to everyone. Jack Drummond’s grandson also gives his take on archival documents relating to his family, saying there wasn’t one strategy that allowed his grandfather and his brothers to acquire so much land and that their success is rooted in their early achievements in the ranching business.

— With assistance from Allison Herrera