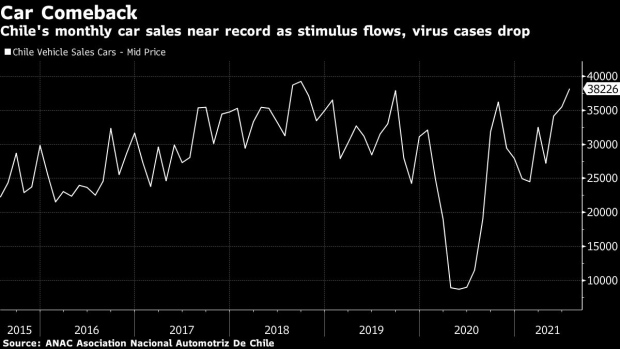 Silverado pick up truck for sale outside a Chevrolet dealership in Santiago, Chile, on Thursday, Sept. 16, 2021. Fast economic growth in Chile, along with supply chain shortages, has led to high demand for cars from cash-flush Chileans, with waitlists stretching on for months. , Bloomberg

(Bloomberg) -- In downtown Santiago, the epicenter of what is likely the world’s hottest economy, Carol Castillo is meeting lots and lots of angry people.

Castillo is a saleswoman at a Chevrolet dealership in the city, where demand for cars is so red hot from cash-flush Chileans that wait lists stretch on for months. Customers don’t take this too well, Castillo says. Shock leads to frustration and at times to outbursts, especially from those looking to buy a Silverado. The current estimated delivery date for a diesel version of the popular pickup: October of 2022.

“Everybody wants their car right now,” Castillo said. It was a Wednesday morning, typically a quiet time for the dealership. And yet as Castillo looked across the showroom, every single table was filled with would-be buyers.

The shortages aren’t uniquely Chilean, of course -- global supply-chain problems are spurring wait times for cars in many countries -- but they’re particularly acute here. Locals are on a buying spree of epic proportions. Cars, refrigerators and electronics are all flying off the shelves.

Growth, according to the central bank, will zoom to as high as 11.5% this year, which would not only make it the fastest among major economies but also a record in Chile. That’s no small feat in a country that sustained one of the greatest economic expansions of modern times in the 1980s and 1990s, after dictator Augusto Pinochet’s “Chicago Boys” unleashed a wave of free-market reforms.

Ironically, one of the strongest drivers of growth now comes from partially dismantling a key economic pillar from that era by allowing early withdrawals from the private pension funds established under Pinochet. That’s injected $49 billion into the economy. Also helping are the government’s pandemic-era cash handouts, another product of the country’s move away from the strictest versions of Chicago Boys capitalism.

“The money came in and then people started to buy cars like crazy,” Castillo observes.

Chile’s coronavirus vaccination rate, near 75%, is the highest in all the Americas, providing yet another lift to the economy as infections decline.

All that leaves central bank officials to predict the fastest economic growth in records going back to 1961, according to prognostications that were revised earlier this month. That forecast is at the top end of estimates for 102 major economies tracked by Bloomberg, which show China expanding by 8.4% and Brazil just 5.2%.

Indeed, signs of a roaring economy are everywhere in Chile. Car sales soared 97% in August from a year ago, nearing the highest for any month on record. Credit and debit card transactions hit a record in August, indicating robust consumer spending. Sales of durable goods surged 130% in the second quarter from a year earlier.

“We’ve seen a strong recovery in confidence among both households and companies,” said Andres Perez, the chief economist for Chile and Colombia at Banco Itau. “It reflects, on one hand, significant improvements in the health situation, and also an environment with ample stimulus and liquidity.”

Perez, who was previously head of international finance at Chile’s Finance Ministry, expects gross domestic product to expand about 10% this year after a 5.8% fall in 2020. Even as the growth rate slows next year, a strong labor market will support consumer spending, he said.

The signs pointing to a roaring economy are causing some concern among analysts who fret that it could overheat and send inflation soaring. Central bank President Mario Marcel has told lawmakers several times in the past month that another round of penalty-free early pension withdrawals -- a proposal lawmakers are considering -- would set off a chain of harmful consequences, including faster price increases, higher financing costs and risks to the financial system.

Andres Balbontin, assistant commercial manager at Salfa, a national chain of dealerships that includes the Chevrolet location in downtown Santiago, said the boom isn’t over. Chile’s recovering economy fueled by stimulus cash will keep sales strong through at least next year.

“There’s tons of money in the streets,” he said.

Castillo, the car saleswoman, has been swamped setting up test drives and haggling over prices, and wary of having to disappoint customers perplexed by the wait for new models. Still, there are moments when she finds her work incredibly gratifying.

The patron that she most vividly remembers from the past few months was a working-class man in his late 30s. He had struggled to save for years, and he was finally able to cobble together enough money to buy his own vehicle.

“He got so emotional that he cried,” she said. “He was finally able to purchase his first car.”