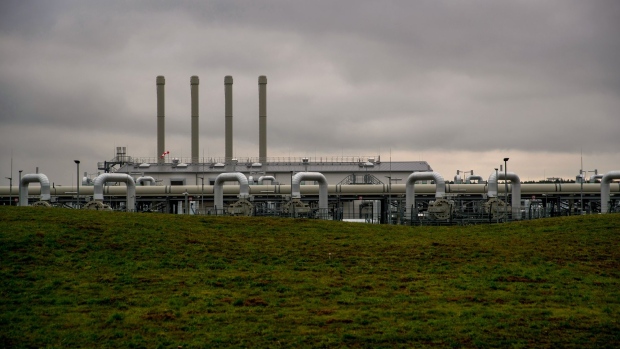 The gas receiving station of the halted Nord Stream 2 project, on the site of a former nuclear power plant, in Lubmin, Germany, on Tuesday, April 5, 2022. Germany is preparing to take a leap into the unknown as Europe starts to get serious about weaning itself off Russian fossil fuels. , Bloomberg

(Bloomberg) -- An investigation has begun after Nord Stream 2, the controversial idled gas pipeline between Russia and Europe experienced a sudden loss in pressure, and a gas leak was detected in Danish waters.

The rapid pressure drop was registered overnight in one of the two strings comprising the link, the pipeline operator said in a statement Monday. “The marine authorities of Germany, Denmark, Sweden, Finland and Russia have been notified immediately,” the operator said. “Investigation is ongoing.”

The location of the incident was identified in the Danish exclusive economic zone south-east of Bornholm island, according to the Nord Stream 2 statement. The Danish Maritime Authority, which announced the gas leak on Monday, said it could be dangerous. “Mariners are advised not to navigate within a 5 nautical miles area of the mentioned position,” the regulator said in its website notice.

European natural gas prices remained broadly steady following the statements as Nord Stream 2 is idled amid the Kremlin standoff with the west over the war in Ukraine.

The link, set to carry as much as 55 million cubic meters of Russian gas per year to Germany across the Baltic Sea, was ready to start full-scale deliveries in December despite U.S. sanctions that delayed the launch of the link for two years.

So far it isn’t clear how much gas was leaked in the Baltic waters. Each Nord Stream 2 string was filled with about 177 million cubic meters of technical gas in preparation for commercial supplies.

Gas leaks in underwater pipelines may present longer-term environmental risks as well as immediate risks of fire. In July 2021, a leaking underwater gas pipeline run by Petroleos Mexicanos in the Gulf of Mexico caused a massive blaze, drawing international attention and criticism from environmental activists and politicians.