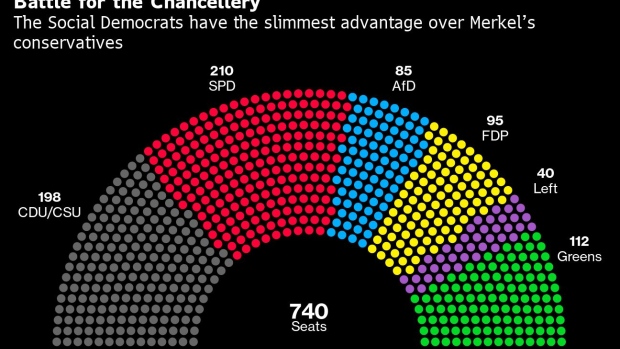 (Bloomberg) -- With German elections failing to produce a clear winner, the two major parties -- Finance Minister Olaf Scholz’s Social Democrats and the conservative CDU/CSU bloc under Armin Laschet -- are both plotting their next moves to secure the chancellery.

The splintered political landscape means that they’ll need the Greens and the pro-business Free Democrats to form a majority. And that’s where it gets complicated.

The Greens have traditionally been more comfortable with Scholz’s SDP. While FDP leader Christian Lindner is on the record as saying he prefers a coalition with the conservatives. They are essentially in a position to start calling the shots on which ministries they want.

Sorting all that out could be a lengthy process -- the record was set four years ago, when Angela Merkel needed about six months to tie up her fourth and final administration.

Until a new chancellor is sworn in, Merkel will continue to run the government in a caretaker capacity with her current cabinet.

The Greens are the SPD’s favored partner, but they’d need the FDP to form a majority.

Trouble is that Lindner has said he doesn’t know how to bridge the ideological divide that exists between his party and the other two. The FDP has vowed not to raise taxes and to restore constitutional limits on borrowing. Those are tough demands for Scholz and the Greens, who want to boost infrastructure spending and tax the wealthy.

The CDU leader is also trying to secure the support of the Greens and the FDP. Angela Merkel tried such a coalition four years ago but Lindner shot it down. This time he says that’s his preferred outcome. The Greens would probably need a stronger nudge: while the CDU and the Greens have managed to form coalitions on the state level, it’s uncharted territory on the national stage.

So who’s in control?

Lindner reached out to the Greens on Sunday night to suggest they get together to settle their differences before they sit down with the bigger parties. If they can reach an outline agreement, they might be in a position to frame the terms for the discussions. Lindner is being touted as a potential finance minister while the Greens could seek wide-ranging powers over climate policy from energy to transport.

Could the two biggest parties get together?

The so-called grand coalition would be a replay of the political grouping as it exists now under Merkel. Shutting out the two junior parties might be hard to explain and Laschet and Scholz are both targeting the chancellery, so an alliance looks a distant prospect. But between them they have a solid majority of 408, so if other negotiations run into trouble it could come into consideration. No one had a grand coalition as their first choice last time, either.

In the days after the election, parties begin exploratory talks to see whether they have enough in common to begin formal coalition negotiations.

Unlike in other parliamentary democracies, the head of state -- in this case President Frank-Walter Steinmeier -- doesn’t designate a chancellor-to-be. The parties explore options on their own.

Once they decide a coalition is possible, they’ll start mapping out the detail. Policy areas are designated to separate groups, while leaders iron out tough differences and make sure the process is moving along.

There will be short tempers, veiled threats and all-nighters. At the end, the coalition accord will be a book-length blueprint detailing everything the government plans to do and has to be signed off by each party. The SPD has previously put big decisions to a membership vote, which can cause further delays.

What if there’s no deal?

If a government can’t be formed, a new election could be held. But German authorities prize political stability, so it would be highly unusual. More likely, President Steinmeier would urge the parties to come up with a deal for the good of the republic -- just like in 2017. When Merkel informed Steinmeir that her first effort had failed, the president’s pressure was key to coaxing the reluctant Social Democrats to the negotiating table.

When will we have a new chancellor?

Laschet insisted there will be a deal by the end of the year. Once the parties sign off on the coalition accord, they’ll call a vote in the Bundestag. With the majority secured, the new head of government is voted in and takes the oath of office. If that process drags on past Dec. 19, Merkel will have surpassed Helmut Kohl to become Germany’s longest-serving postwar chancellor.