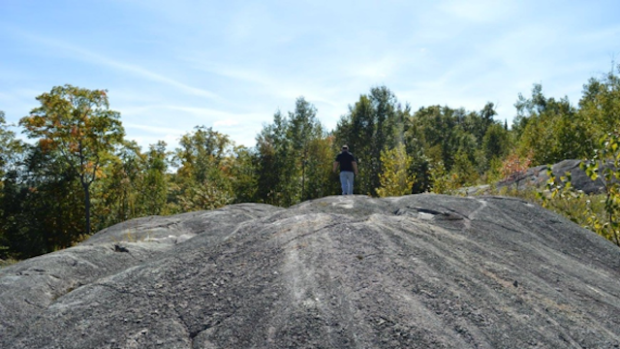 A look at a mineralized outcrop containing Platinum Group Metals (PGMs) on the River Valley project site. Metals such as PGMs and lithium will continue to experience sustained increases in demand as the global push for sustainability becomes mainstream.

• Industry experts are forecasting a consistent increase in demand for lithium, used to develop the batteries in HEVs and BEVs

• New Age Metals’ flagship River Valley primary PGM project in Ontario, and lithium division with assets in Manitoba positions the company as a key player in the growth of HEVs and lowering CO2 emissions

Harmful carbon dioxide emission levels are rising globally, largely due to the use of fossil fuels as the primary source of energy used by the transportation industry. Examples of this use include the powering of jumbo jets, container ships, and semi-trucks. Passenger vehicles also rely on fossil fuels and have a bad reputation for the amount of pollutants they release into the atmosphere on a daily basis.

However, passenger vehicles produce more than four times the greenhouse gas (GHG) emissions of all domestic aviation, according to the Globe and Mail. The focus over the last few years has been on making these passenger vehicles more environmentally-friendly, which is a large reason why automakers have started producing electric or hybrid electric vehicles (HEVs).

While automakers are being forced by emissions regulation to reduce their carbon foot-print, the majority of consumers are not ready to go fully electric and are increasingly choosing hybrid vehicles to bridge the gap with cars that solely use batteries. With more vehicles being sold worldwide each year, especially those that are less pollutive, automakers will need more of the critical raw materials used to create the hybrid and electric vehicles.

This need for less pollutive methods of transportation is where lithium and palladium enter the picture. Lithium is used to produce batteries, but the size of car batteries used in HEVs and the increase in HEV sales that is anticipated by the industry will require substantially more lithium than what is available in the market today. Palladium, which is a member of the PGM family, is largely used to reduce pollution that originates from vehicles operating with internal combustion engines (ICE) through its use as the primary ‘catalyst’ in catalytic converters (commonly known as auto-catalysts).

While palladium is often overlooked when it comes to the push for sustainability, it has played a huge role in reducing the amount of toxic emissions being released into the atmosphere. This positive impact is most noticeable in urban areas where automobiles are concentrated. The value of an ounce of palladium has increased exponentially in the past year, rising 60 per cent year-over-year in September 2019 from under USD$950 to over USD$1500. The reason for the dramatic price movement is due to supply concerns and the metals value as the premier option for use in auto-catalysts.

With ICE powered vehicles not going away any time soon, the global demand for palladium will endure as a pollution-control device, and investors are taking notice. Anton Berlin is the Head of Strategic Marketing at the world’s largest producer of Palladium, Norilsk Nickel. He recently stated, “Hybrids – cars with both an electric battery and a combustion engine – will dominate the electric vehicle market in the long-run, which suggests a long-term advantage for the PGM market.”

The extensive infrastructure required to support a universal transition to EVs still needs time to be completely fleshed out but is gaining speed. According to a new report entitled, “2019 Investor’s Business Daily/TIPP Electric Vehicle Outlook Study,” range and available charging stations are what make potential EV buyers the most apprehensive, although these are issues that are currently being addressed.

Regardless, the desire to limit pollution is leading to the growing demand for middle-ground HEVs, which is causing car manufacturers to focus on their abilities to design and assemble automobiles that emit less noxious fumes primarily through the use of palladium and lithium.

“Research has shown that hybrid electric vehicles actually require more palladium and lithium than traditional gasoline-powered vehicles, so increased adoption of hybrid vehicles will subsequently increase demand for these metals.”

A flagship project in a historic mining district

Anticipating the continued strength in demand for palladium and the general forecast for lithium demand is New Age Metals (TSX.V: NAM, OTCQB: NMTLF, FSE: P7J), bolstered by the company’s flagship River Valley project in the Sudbury region of Ontario. The Sudbury region, known as the mining capital of Canada, is largely dominated by major mining and processing operations run by Vale and Glencore.

However, these companies’ operations are facing depleted ores to feed processing facilities and may need to acquire additional sources to operate closer to their intended capacity. This is where River Valley comes in as an integral player, which lies just 100 km from Sudbury and hosts 2.9 million ounces in the (NI-43 101 compliant) measured and indicated category of palladium-equivalent (PdEq) resources and 1.1 million ounces in the inferred category.

Harry Barr, CEO of New Age Metals, is well aware of the role his company is poised to play as demand for hybrids continually increases. “Research has shown that hybrid electric vehicles actually require more palladium and lithium than traditional gasoline-powered vehicles, so increased adoption of hybrid vehicles will subsequently increase demand for these metals,” he notes.

New Age Metals recently had a preliminary economic assessment completed on River Valley, projecting a mine with a 14-year lifespan, 6 million tonnes annually of potential process plant feed at an average grade of 0.88 g/t PdEq and a process recovery rate of 80 per cent, resulting in an annual average payable PdEq production of 119,000 ounces.

With this in mind, Barr and his team are focused on maximizing this opportunity to expand the resources at River Valley and develop it to a point where the project achieves feasibility and is producing. In the meantime, the project also has tremendous exploration upside and management plans to continue with an aggressive exploration program.

A credible investment alternative to the big PGM players

A key advantage for the River Valley project is its location in a safe, reliable mining jurisdiction. The majority of the world’s palladium currently comes from South Africa and Russia, both of which could be problematic in terms of long-term supply security, political issues and concerns regarding human rights and sustainability.

Worth noting is the fact that Norilsk Nickel is not only the worlds’ largest producer of palladium and nickel, but also the largest emitter of sulfur oxides which is a pollutant considered immediately dangerous to life and health.

Fortunately, New Age Metals’ Ontario-based project offers the benefit of being located in a safe jurisdiction that has excess processing infrastructure and is known for moderating the environmental impacts from mining and smelting. Barr explains, “Sudbury’s been a mining center for 120 years, so every type of mining service is nearby.” Given this unique situation, the company represents a credible investment opportunity.

Sid Rajeev, Vice President of Fundamental Research Corp., conducted a thorough analysis of the River Valley PEA. He notes, “Our biggest takeaway from the PEA was that, at a reasonable palladium price estimate of USD$1,200 per oz, the study showed an after-tax net present value at 5 per cent of $138 million. New Age Metals’ current enterprise value is just USD$3 million, implying that shares are trading at just 2 per cent of net asset value.”

This level of potential upside is rarely available to the investment community and as New Age Metals brings River Valley towards pre-feasibility, it’s unlikely that the company will remain undervalued for long.

“Our biggest takeaway from the PEA was that, at a reasonable palladium price estimate of USD$1,200 per oz, the study showed an after-tax net present value at 5 per cent of $138 million. New Age Metals’ current             enterprise value is just USD$3 million, implying that shares are trading at just 2 per cent of net asset value.”

Having a substantial deposit of PGMs in North America positions New Age Metals to benefit from the future of sustainability, however there is a general lack of knowledge about PGMs in North America due to the low number of primary PGM producers in the arena. The company is in the process of moving River Valley along the development curve but is also seeking a qualified partner to assist in further exploration and development of the project.

Adding to the company’s green energy story is its suite of lithium projects in Manitoba. The demand for this metal is forecasted to increase by 20 per cent per year through to 2028. With lithium in high demand due to the ever-increasing growth in the popularity of battery-powered vehicles, these projects give the company optionality on lithium discovery; two of its eight projects are currently drill-ready. Plans to drill on the ‘Lithium One’ and ‘Lithium Two’ are in place and company management is anticipating the initiation of these drill programs in the near future.

The company’s lithium projects are situated along strike of the Tanco Pegmatite and the claims encompass several pegmatite groups. The projects are also located 140 km northeast of Winnipeg, Manitoba. The Tanco mine was owned by the Cabot Corporation who announced in January 2019, that it would be selling the mine to Sinomine Rare Metals Co. Ltd for USD$130 million. This sale demonstrates a high interest in the project and potentially the surrounding area, which lends credibility to New Age Metals’ projects, based on shared geology and proximity.

Exploration on Lithium One is ongoing with concentration of the northern section, with focus on the Annie and Silverleaf Pegmatites. Silverleaf Pegmatite has zones of spodumene and lepidolite exposed on surface with samples up to 4.1 per cent lithium oxide (Li2O). The Annie Pegmatite returned values up to 0.6 per cent Li2O and 0.37 per cent Ta2O5.

On Lithium Two, the Eagle Pegmatite is exposed on surface and was last drilled in 1948, and at the time it was indicated that it remains open to depth and along strike. A historic tonnage of 544,460 tonnes of 1.4 per cent Li2O was reported during this year, however the actual amount has not been confirmed by a qualified person at this time.

With drilling set to begin in Manitoba and River Valley continuing to move along the development curve, New Age Metals expects to consistently generate valuable news for investors in the coming months, keeping the company top-of-mind. Its position in palladium and lithium provide the company with incredible potential as a high-performing source for investment as the need for sustainable transportation continues to be a significant social issue.

The following video is a short overview of New Age Metals, and outlines some of the reasons why the company is an avenue for investment in the future of sustainability associated with the electrification of transport.