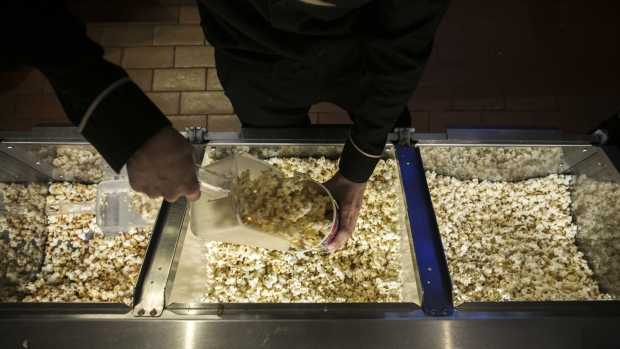 An employee scoops popcorn at a concessions stand at the Paragon Cineplex cinema. , Bloomberg News

TORONTO -- Independent cinemas across Canada say they are being kept from screening top films like "Parasite" and "Hustlers" as they're released -- and they claim theatre giant Cineplex Inc. is to blame.

In a petition signed by over 8,000 people, indie cinemas are accusing Cineplex of engaging in anti-competitive behaviour by blocking their ability to screen films at the same time as the Toronto-based theatre giant.

The petition, launched by Vancouver's Rio Theatre, calls for support for indie theatres. It claims that if a distributor tries to book a film with an indie theatre anywhere near a Cineplex location, the cinema giant will threaten to pull their own screenings of that film in the area, spooking distributors into shutting out smaller theatres.

"This is something indie theatres have been putting up with for years," said Corinne Lea, the Rio's owner. "We are the little guys, so we don't have much power in this equation."

She sees the deal as a window to press for change in the industry and is particularly concerned because she says her theatre often has to wait between three and six months to screen some films Cineplex has had for months.

The crime drama "Hustlers" opened in most theatres in Sept. 13, but because of Cineplex wanting to screen it, the Rio didn't get to show it until Dec. 27, said Lea. There were months-long waits for "The Farewell," "Bohemian Rhapsody" and "Joker" too.

When the Rio tried to screen folk horror film "Midsommar," which opened June 18 at Cineplex, Lea said she couldn't get the go-ahead until August 10.

Then, ahead of Aug. 10, the Rio's permission to screen the film was yanked. Lea said she was told the Rio was being prevented from a screening because Cineplex still wanted to show the movie -- but the distributor wouldn't share that news by phone.

"We have gotten smarter and said 'can you put that in writing?' and they won't," she alleged.

Cineplex spokesperson Sarah Van Lange said in a email to The Canadian Press that it is up to film distributors to decide where their films are played.

"Cineplex does not own the rights to the movies that appear on our screens," she wrote. "We license them from Canadian distributors to play in our theatres."

The Canadian Press reached out to a handful of distributors behind high-profile films screened by Cineplex to verify the claims laid out in the petition, but none replied to emails or phone calls.

Lea intends to send her complaint to the Competition Bureau of Canada. The bureau would not confirm that it was investigating the matter, but said it was aware of the petition and that it takes all allegations of anti-competitive conduct seriously and will not hesitate to take appropriate action.

The Paradise only opened its doors in December, but its director of programming Jessica Smith said the theatre immediately noticed the problem with securing films Cineplex still wants to screen. Smith has heard the situation has gotten "dramatically worse" in recent years.

"The window where something moves over from a first-run theatre like a Cineplex to a second-run theatre has increased," she said. "Now, by the time we can access the film, it's been long available on Blu-Ray."

This has been the case with "Parasite," this year's best picture winner at the Oscars. Smith said she has been asking distributors if she can run it week after week, but has been constantly told no, while it continues to screen at Cineplex.

"The distributors are beholden to Cineplex for the vitality of their business. It makes sense that they have to do whatever Cineplex wants them to do," she said. "But we don't really pose any threat to a nine-screen multiplex in the downtown core, so my hope is that these kind of unspoken rules will be relaxed and it can be win-win for everyone."