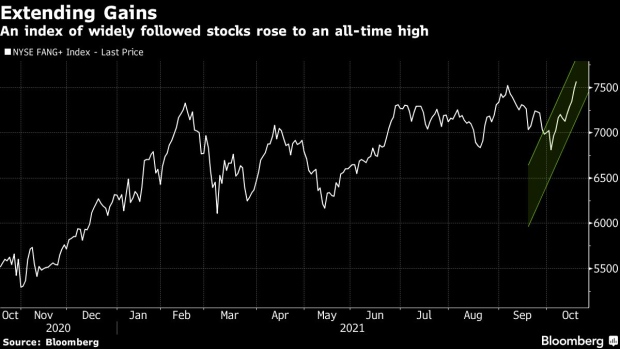 (Bloomberg) -- An index of widely followed technology and internet stocks rose to an intraday record on Tuesday, hitting its first all-time high in more than a month.

The NYSE FANG+ Index rose 1.1% and was on track for a fifth straight positive session, its longest such streak since June. The index is up 11% from a low hit earlier this month. The index’s previous intraday record was set on Sept. 7.

There are 10 components in the index, with most in solidly higher territory on Tuesday. Notably, Alibaba Group and Baidu both advanced, extending a recent climb for U.S.-listed shares of China-based companies. Alibaba jumped 4.1% and Baidu was up 2.2%.

Among U.S. stocks, Facebook gained 1.3%, in a move that MKM Partners suggested could represent investors rotating into the social-media company and out of Snap. Apple Inc. rose as much as 1.8% and was on track for a fourth straight session of gains. On Monday, Apple unveiled new products that analysts were positive on.

A few of the index’s components were in negative territory, with Amazon.com Inc. down 0.4%, while Netflix Inc. was down 0.5% ahead of quarterly results due after the market closes.