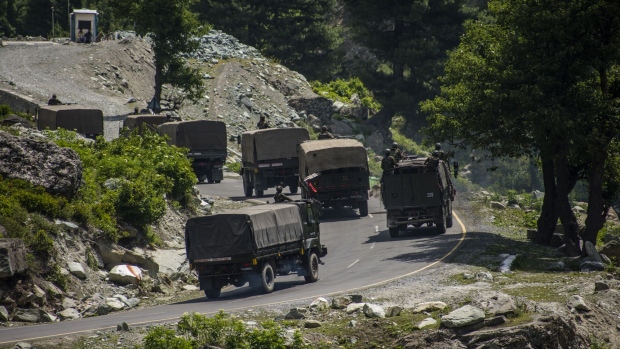 GAGANGIR, KASHMIR, INDIA - JUNE 19: An Indian army convoy drives towards Leh, on a highway bordering China, on June 19, 2020 in Gagangir, India. As many as 20 Indian soldiers were killed in a "violent face-off" with Chinese troops on Tuesday in the Galwan Valley along the Himalayas. Chinese and Indian troops attacked each other with batons and rocks. This is the deadliest clash since the 1962 India-China war and both have not exchanged gunfire at the border since 1967. Since the recent clash, there has been no sign of a breakthrough. India said its soldiers were killed by Chinese troops when top commanders had agreed to defuse tensions on the Line of Actual Control, the disputed border between the two nuclear-armed neighbours. China rejected the allegations. It blamed Indian soldiers for provoking the conflict, which took place at the freezing height of 14,000 feet. The killing of soldiers has led to a call for boycott of Chinese goods in India. On Thursday, thousands of people attended the funerals of the 20 slain Indian soldiers. To show their anger, Indians burnt Chinese flags and posters of China's President Xi Jinping in many states. (Photo by Yawar Nazir/Getty Images) , Photographer: Yawar Nazir/Getty Images AsiaPac

India said its troops clashed with Chinese solders along their contested Himalayan border, the latest skirmish in a conflict that has simmered since May.

The Chinese troops carried out “provocative military movements” late on Saturday night, India’s Defense Ministry said in a statement Monday. It accused the People’s Liberation Army of violating diplomatic and military agreements on the undemarcated area.

Beijing was in close communication with New Delhi regarding issues on the ground, Chinese Foreign Ministry spokesman Zhao Lijian said at a daily briefing in Beijing on Monday. “Chinese border troops always strictly abide by the Line of Actual Control,” Zhao said. “They never cross the line.”

India’s benchmark stock index S&P BSE Sensex plunged 2.1 per cent in Mumbai, the biggest drop since May 18. The rupee weakened 0.3 per cent.

​The latest skirmish between the two sides took place along the Southern bank of the Pangong Tso -- a glacial lake at 14,000 feet -- along the 3,488 kilometer (2,162 mile) Line of Actual Control. Both India and China have moved thousands of troops, tanks, artillery guns and fighter jets close to the border.

The number of casualties or captured troops is not yet clear, and while there’s a high-level military meeting in progress to resolve the tensions, India’s military is fully deployed along the disputed border.

“It appears to be a well thought out and deliberate move,” Bahadur said. “China, it appears, is trying to change the alignment of the Line of Actual Control and put further pressure on Indian positions.”

Indian troops “undertook measures to strengthen our positions and thwart Chinese intentions to unilaterally change facts on ground,” the ministry said, noting it would not release any further details to “maintain operational security.”

India and China’s worst dispute in four decades culminated in the death of 20 Indian soldiers and an unknown number of Chinese soldiers in an ugly battle on June 15.

Since then tensions have continued to simmer, with India revealing in late July it was positioning an additional 35,000 troops along the border as the possibility of an early resolution to the deadly tensions between the two neighbors faded.