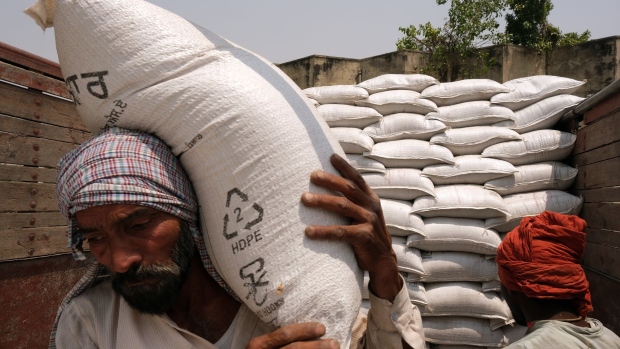 Workers unload wheat sacks from a truck at a Punjab Grains Procurement Corp. facility in the Ludhiana district of Punjab, India, on Sunday, May 1, 2022. A blistering heat wave has scorched what fields in India, reducing yields in the second-biggest grower and damping expectations for exports that the world is relying on to alleviate a global shortage. Photographer: T. Narayan/Bloomberg , Bloomberg

(Bloomberg) -- India is allowing “some relaxation” of its order restricting wheat exports to allow traders to meet prior commitments, according to the trade ministry. Wheat futures dropped as much as 3.8% in Chicago.

Wheat export consignments that have been handed over to customs for examination, and registered in their systems on or before May 13, will be cleared for export, the ministry said in a statement on Tuesday.

The government has also given the green light for a wheat consignment to sail for Egypt following a request from that government, it said. This was already loading at Kandla port and totals 61,500 tons, it said.

The government, in an order dated May 13, restricted wheat exports to manage the food security situation in the country. It already made exceptions for prior commitments made by private trade through letters of credit, and for some government-to-government deals. Shipments were curbed after record heat slashed production and drove up domestic prices.