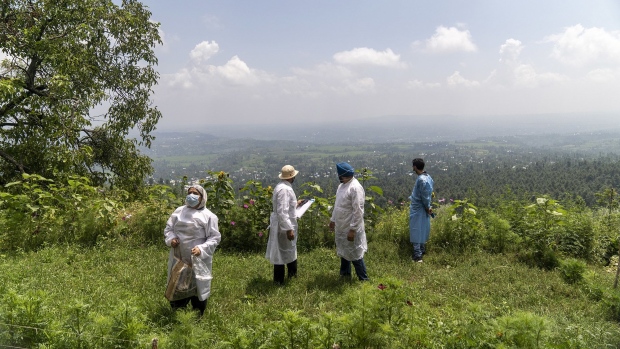 A 'door-to-door' Covid-19 vaccination team surveys the area during a vaccination drive at a village in the Budgam district of Jammu and Kashmir, India. , Photographer: Sumit Dayal/Bloomberg

(Bloomberg) -- India granted emergency-use approval to its first DNA-based vaccine against Covid-19 as the world’s second-worst-hit nation seeks to bolster its immunization drive to ward off a possible third wave of infections.

A three-dose vaccine developed by Ahmedabad-based Cadila Healthcare Ltd., which had reported 67% efficacy against symptomatic Covid in clinical trials in July, was given the go ahead on Friday, the government said in a statement. This is the second indigenously-developed shot to receive approval.

The shot, which Cadila claims works against newer virus strains, including the highly-infectious Delta variant, adds to the country’s arsenal in fighting the virus. Covid has so far sickened more than 32.3 million in the South Asian nation and killed more than 433,049, especially during a devastating second wave a few months back. Speedier inoculations -- known to reduce hospitalization and deaths -- are key to averting future virus waves in the densely-populated country.

The shot is “the world’s first and India’s indigenously developed DNA-based vaccine for Covid-19 to be administered in humans including children and adults 12 years and above,” Cadila said in a statement. It also plans to seek approval for a two-dose regimen of the vaccine and make a 100-120 million doses annually.

India, which has fully vaccinated only 9% of its population, has now approved six vaccines. Two of them from AstraZeneca Plc and one from Hyderabad-based Bharat Biotech International Ltd. are already widely in use. Russia’s Sputnik V has been administered in small numbers, while shots from Johnson & Johnson and Moderna Inc. aren’t being used as the makers continue to negotiate for legal indemnity.

Unlike traditional vaccines, Cadila’s ZyCoV-D is plasmid DNA vaccine that introduces a DNA sequence encoding the antigen in the body and not a weakened form of the pathogen. Tokyo-based AnGes Inc. and the U.S.’s Inovio Pharmaceuticals Inc. are among other companies working on DNA-based vaccines. No DNA vaccine has been widely used against any disease thus far, but they are more stable and easier to store than mRNA shots.

Home to the world’s biggest vaccine-producing industry, India till early this year was seen as a major supplier of Covid vaccines to poorer nations around the world. But those plans went awry amid India’s deadly second wave, vaccine supply shortfalls and consequent export ban from the Indian government.