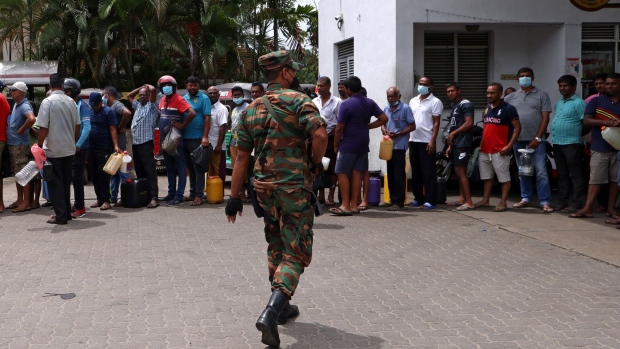 A soldier keeps watch over a line of customers queueing for fuel at a gas station in Kandy, Sri Lanka, on Friday, June 17, 2022. The government of Sri Lanka declared Friday a holiday for public offices and schools to curtail vehicular movement as the country, facing its worst financial crisis, runs out of fuel for transport and there’s little signs of fresh supplies coming in. , Bloomberg

(Bloomberg) -- India is assessing the gravity of Sri Lanka’s economic crisis, amid calls from the South Asian nation to its neighbor for more aid.

A delegation from New Delhi, including Indian Foreign Secretary Vinay Kwatra, arrived in Sri Lanka Thursday on a whirlwind visit and will meet President Gotabaya Rajapaksa and Prime Minister Ranil Wickremesinghe, according to Sri Lanka’s Ministry of Foreign Affairs.

“The delegation will also hold discussions with senior officials on the short-term and long-term assistance requirements,” the ministry said in a statement.

The meeting comes after the country’s Prime Minister told parliament on Wednesday that Sri Lanka’s economy has “completely collapsed” and an agreement with the International Monetary Fund is the only path to revival. The nation is unable to purchase fuel, even for cash and is seeing signs of a possible fall to rock bottom as shortages of fuel, food, electricity worsen.

Sri Lanka has taken $4 billion worth of credit so far from India, though, it may not be able to maintain the momentum, Wickremesinghe said. Meanwhile, Sri Lanka has reached out to several companies and countries, including Russia, for fuel supplies, according to the nation’s energy minister.

Sri Lanka needs about $6 billion in aid from the IMF and countries, to tide over the next six months. Local authorities are looking to fast-track ongoing bailout talks with the Washington-based lender and are planning to hold a credit aid conference with friendly nations, including India, Japan and China to secure fresh funding.

The island nation’s economic activity has come to a near standstill with government offices and schools shut in order to conserve fuel.