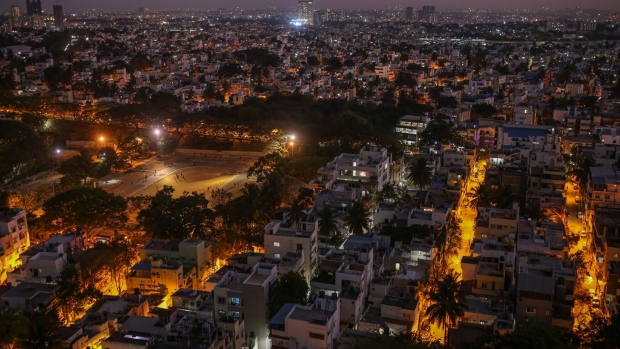 Commercial and residential buildings at dusk in Bengaluru, India, on Monday, Feb. 28, 2022. Solar power, which has become the cheapest source of new power, is growing fast. India aims to install 175 gigawatts of renewable energy, three times the amount currently deployed in the U.K., in 2022. , Photographer: Bloomberg/Bloomberg

(Bloomberg) -- India has blocked nearly half the country’s provinces from accessing spot power exchanges after they failed to pay bills worth 51 billion rupees ($640 million), as it implements new rules aimed at forcing states to make timely payments.

Thirteen provinces won’t be able to buy or sell electricity at power exchanges until they pay their dues to generators and transmission companies, according to S.R. Narasimhan, chairman at Power System Operation Corp., the country’s central grid operator. Rules introduced in June say that state power retailers will lose access to short-term sources of electricity if they fail to pay within two-and-a-half months from the date bills are raised.

India’s loss-making, state-run retailers are often seen as the weakest link in the country’s electricity industry, causing distress that trickles through the chain, from power producers, to coal suppliers and project lenders. Nearly 90% of the nation’s electricity is sold through these utilities and their inability to pay on time is seen as impeding investments to modernize infrastructure and provide reliable power supply.

Prime Minister Narendra Modi’s government, which is working on a plan to turn these utilities around, put out new guidelines earlier this year that empowered the national grid operator to curtail access to power sources for distributors who have defaulted on payments.

States including Madhya Pradesh, Maharashtra, Chhattisgarh and Tamil Nadu have been barred from accessing power exchanges, Narasimhan said in a text message.

“States will lose out on any opportunistic trade at the exchanges and will be forced to pay up,” according to Rupesh Sankhe, vice president at Elara Capital India Pvt. in Mumbai. “Such tough measures are necessary to bring in payment discipline in distribution companies.”