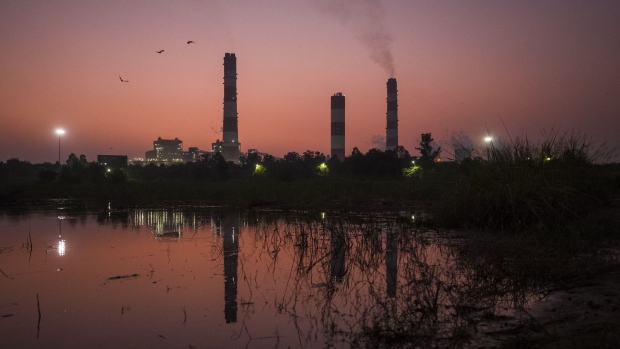 The coal-fired NTPC Ltd. Dadri Power Plant in Gautam Budh Nagar district, Uttar Pradesh, India, on Thursday, Oct. 7, 2021. India, which relies on coal for about 70% of electricity generation, has already seen signs of power shortages, and needs to lift deliveries to avert the risk of blackouts. Photographer: Anindito Mukherjee/Bloomberg , Bloomberg

(Bloomberg) -- India plans to take more ambitious climate action by 2030, even as the nation pushes back against pressure to set a target for net-zero greenhouse gas emissions.

The country has already mostly met a goal of having 40% of installed power capacity from non-fossil fuel sources, and has options to extend that action, Finance Minister Nirmala Sitharaman said Sunday in an interview.

“We have shown a very clear and spectacular shift from where we were to high goals in renewable energy,” Sitharaman said. “We have also now enhanced what we can achieve by 2030.”

Expectations that China and India, two of the world’s biggest emitters and largest coal users, won’t make major new pledges on long-term climate action are clouding the prospects for success at the United Nations climate summit scheduled to open in Glasgow, Scotland at the end of this month. U.S. climate envoy John Kerry has already warned nations could fall short of a new agreement on more aggressive measures to tackle global warming.

India has so far rejected pressure to commit to a net-zero emissions target and has instead urged G-20 nations to make a pledge focused on per-capita emissions. Neighbor and rival China last year announced its own program to achieve carbon neutrality by 2060.

“We seem to be bringing in newer and newer demands particularly on emerging economies,” Sitharaman said in the interview in New York, where she is attending G-20 meetings taking place ahead of COP26.

India wants any new agreements on climate action to be made within the framework of United Nations Framework Convention on Climate Change, she said. The South Asian nation will continue to consider how climate goals will affect ordinary citizens, including the affordability of alternatives to fossil fuels, according to Sitharaman.

The country’s updated 2030 climate plans, or nationally determined contributions, may include commitments to reduce emissions intensity by at least 46% to 48% from its 2005 levels, the Economic Times reported, citing unnamed officials. The country, which missed an Oct. 12 U.N. deadline to submit the revised plans, could also pledge to raise non-fossil fuel energy sources to at least 60%, and potentially to 65% by 2030, according to the newspaper.

Announcements may be made as part of Prime Minister Narendra Modi’s intervention at the Leaders’ Summit at COP26, the report said.

A spokesman for the federal Environment Ministry did not immediately reply to calls and a text message seeking comment.

While India has made ambitious commitments on renewables and on adopting technologies including hydrogen and battery storage, it remains shy of turning its back on coal. The dirtiest fossil fuel, responsible for carbon dioxide emissions and pollution, currently helps produce about 70% of the country’s power.

The fuel’s role has been underscored by a recent power crisis triggered by declining supply to power plants and industrial facilities, consumers that are expected to continue to rely on coal for decades.

After the 2015 Paris climate summit, India set itself a target to add 450 gigawatts of renewable energy generation. Emissions intensity has so far fallen more than 24% from a 2005 baseline, compared with a 33% to 35% reduction targeted by 2030, government data shows.