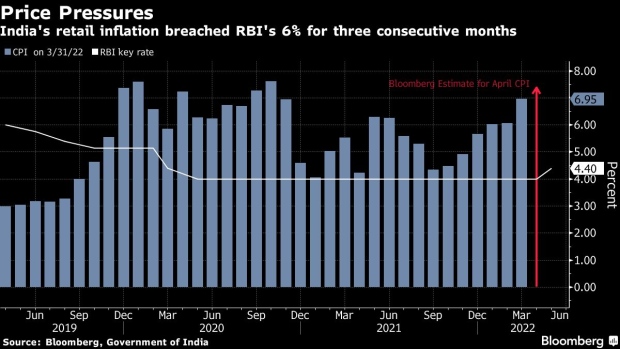 There is also a growing chance that inflation will breach the upper end of the Reserve Bank of India’s targeted 2%-6% range for the next two quarters as a shortage of coal and edible oils would feed into the readings, said the person who declined to be identified as the discussions are private.

That means the inflation rate would have breached the RBI’s accepted range for three straight quarters, and the central bank will have to write a letter to the government, as laid down by law, explaining why it failed to keep costs under check. It will also have to lay out remedial measures.

The RBI raised key rates for the first time in nearly four years and moved to drain billions from the banking system in a surprise move last week to tame inflation. The decision stunned markets and pushed the benchmark 10-year bond yield to its highest in three years.

Governor Shaktikanta Das retained the April inflation forecast for the financial year through March 2023 at 5.7% but added there were “upside risks”.

India’s annual retail inflation in March rose to a 17-month high of 6.95%, a third straight month of staying above the mandated range. The CPI reading for April, due Thursday, is expected to show prices accelerated at its fastest pace since late 2020, according to the median estimate compiled by Bloomberg.

The move to tackle inflation, however, will come at the cost of thwarting a nascent recovery, the person said.