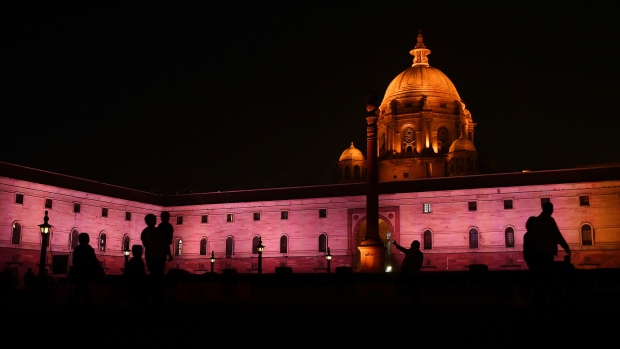 People are silhouetted as the North Block of the Central Secretariat buildings, which houses the Ministries of Finance and Home Affairs, stands illuminated at night in New Delhi, India, on Sunday, Jan. 28, 2018. With India's Finance Minister Arun Jaitley readying to deliver his annual budget on Feb. 1, traders are seeking to hedge a rally that has added more than $425 billion in equity values in the past four months. , Bloomberg

(Bloomberg) -- India may soon roll back a plan to impose an additional levy on foreign investors, a government official said about the decision that will help stem a slide in local equities.

The government is working on steps to give cushion to the economy, the official told reporters, asking not to be identified as a decision is yet to be announced. That may include an exemption to foreign portfolio investors from a tax on super rich announced in the budget.

Finance Minister Nirmala Sitharaman had proposed increasing the effective tax rate on individuals with taxable annual income of above 20 million rupees ($283,000) by about 3%, and for those earning above 50 million rupees by 7%. Foreign Portfolio Investors became an unintended target of the move.

The tax proposal, along with a lack of measures to boost the economy in the July 5 budget, led to foreigners withdrawing more than $3 billion from Indian shares, putting pressure on stocks and the rupee. The S&P BSE Sensex and NSE Nifty 50, India’s key equity indexes, erased declines and rose as much as 0.5%.

Sitharaman had said earlier that FPIs registered as trusts may consider the option of registering as companies to escape the higher tax. However, the conversion would have required several changes to the tax law.

To contact the reporter on this story: Siddhartha Singh in New Delhi at ssingh283@bloomberg.net

To contact the editors responsible for this story: Nasreen Seria at nseria@bloomberg.net, Karthikeyan Sundaram, Unni Krishnan