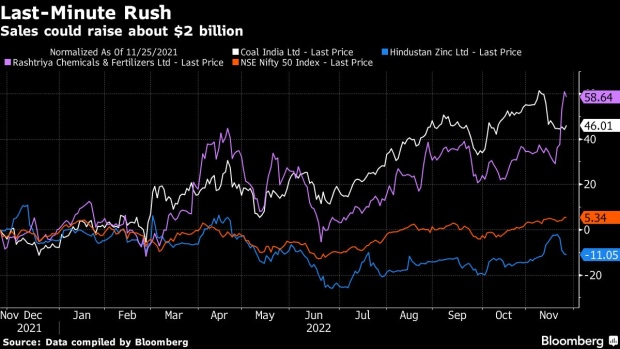 (Bloomberg) -- India plans to sell small stakes in state-run firms including the world’s biggest coal miner and Asia’s largest zinc producer, to ride a stock market boom and boost revenue in the final quarter of the financial year, according to people familiar with the matter.

The government is looking to sell 5%-10% in Coal India Ltd., Hindustan Zinc Ltd., Rashtriya Chemicals and Fertilizers Ltd. via the so-called offer-for-sale mechanism, the people said, asking not to be identified as the details aren’t yet public. In all, five firms could be chosen, including a listed entity under the railway ministry, they added.

At current prices, sales at the lower end of the range could fetch the government some 165 billion rupees ($2 billion), according to Bloomberg calculations. Local stocks are at a record high, supported by a healthy pace of economic growth, and the cash raised will help Prime Minister Narendra Modi’s administration fund its subsidy bill that has surged partly because of the war in Ukraine.

India had budgeted 650 billion rupees from such asset sales in the year through March, but has so far raised just over a third of the target, mainly from the $2.7 billion initial public offering of Life Insurance Corp. in May.

Roadshows have started to gauge investor interest in the stake sales, the people said. A spokesperson for the Finance Ministry couldn’t be reached for comment.

Coal India jumped about 46% in the past year, while Rashtriya Chemicals gained 58%, outstripping the benchmark S&P BSE Sensex’s roughly 6% advance.

--With assistance from Ashutosh Joshi.