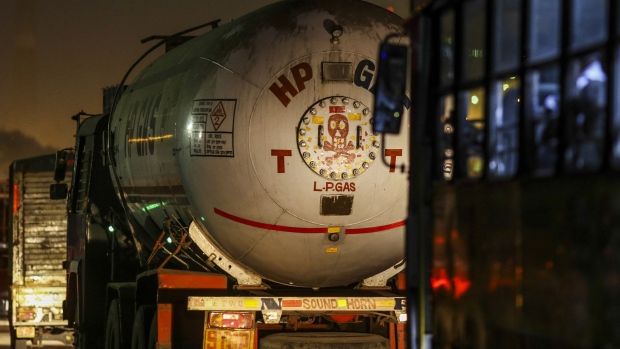 A Hindustan Petroleum Corp. liquefied petroleum gas (LPG) tanker sits in traffic at night in the Mahul area of Mumbai, India, on Friday, April 7, 2017. Expanding fuel shipments from the Persian Gulf will intensify competition from Europe to Asia, squeezing profits across the global refining industry and contributing to a looming glut of oil products. Photographer: Dhiraj Singh/Bloomberg , Photographer: Dhiraj Singh/Bloomberg

(Bloomberg) -- India has cut the price for most of its natural gas produced from domestic fields to a level last seen in 2010 and well below the production cost of Oil & Natural Gas Corp. and Oil India Ltd.

The price of gas produced from fields awarded to state explorers has been fixed at $1.79 per million British thermal units, according to the oil ministry’s Petroleum Planning & Analysis Cell. It also cut the ceiling price for gas produced from difficult fields by almost 28% to $4.06/mmBtu.

The new prices, effective for six months from Oct. 1, will make the gas business unprofitable for producers and undermine investments that are key to future production at a time when Prime Minister Narendra Modi aims to increase the share of natural gas in India’s energy mix to 15% by 2030 from about 6%.

A global glut has led to a price crash that has affected India’s gas rate, which is arrived through a formula linked to some international gas markets such as the U.S., Canada, Russia and the U.K. ONGC’s average cost of gas production is about $3.7/mmBtu, the company said on June 30. Oil India’s break even cost for gas is $2.25 a unit, Chairman Sushil Chandra Mishra said on Sept. 29.

ONGC and Oil India together make up nearly 85% of India’s gas production. ONGC produces more than 60 million standard cubic meters of gas daily from fields where the government regulates the price.

“Domestically, the extremely low gas prices are a cause of anxiety for gas producers,” ONGC said in its latest annual report, adding most gas projects are running cash-negative at current tariffs. “Without the necessary policy support and fiscal incentives the prospect of a gas-based economy looks difficult.”

The oil ministry is considering a proposal of a floor price for gas that’s regulated by the government to shield explorers, according to people with knowledge of the matter. It could be linked to the popular benchmark Japan-Korea Marker that is used for LNG tariff in North Asia with a discount.

India will phase out price controls in natural gas and make it market linked, Oil Minister Dharmendra Pradhan said at the BloombergNEF Summit in June.