The Reserve Bank of India (RBI) logo is displayed on a gate at the central bank's headquarters in Mumbai, India, on Tuesday, April 1, 2014. , Bloomberg

The Reserve Bank of India lowered its benchmark repurchase rate by 25 basis points to 5.15 per cent on Friday. A majority of the 39 economists in a Bloomberg survey predicted the move, while the rest forecast cuts ranging from 15 basis points to 40 basis points.

“There is policy space to address these growth concerns by reinvigorating domestic demand,” the central bank said in a statement. Governor Shaktikanta Das had first alluded to the space for easing policy while speaking at the Bloomberg India Economic Forum in Mumbai last month.

All members of the six-member Monetary Policy Committee voted for a rate cut. One member voted for a 40 basis point cut, while the others opted for a quarter-point easing. The RBI retained its accommodative policy stance.

Central banks around the world are loosening monetary policy to offset a global slowdown made worse by U.S.-China trade tensions. Australia cut rates earlier this week for the third time this year, while the Philippines and Indonesia eased policy last month. 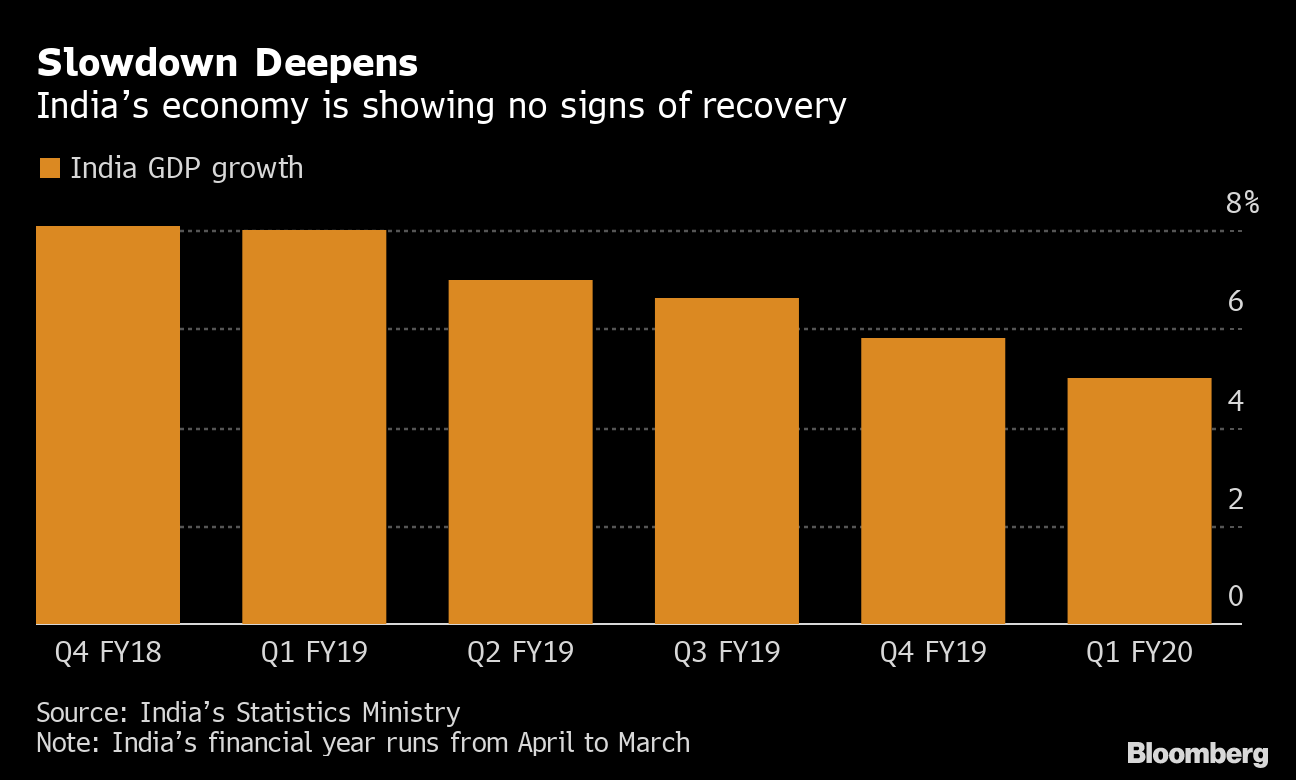 The RBI lowered its full-year growth forecast for a fourth time to 6.1 per cent from 6.9 per cent previously. Gross domestic product rose 5% in the quarter ended June, the weakest pace in six years, and leading indicators tracked by Bloomberg News suggest fairly subdued investment and consumption activity in August.

Friday’s cut takes the benchmark rate to the lowest in almost a decade and follows a number of fiscal steps taken by the government recently to spur growth, including a surprise $20 billion reduction in corporate taxes.

“While the recent measures announced by the government are likely to help strengthen private consumption and spur private investment activity, the continuing slowdown warrants intensified efforts to restore the growth momentum,” the central bank said.

The cut takes the cumulative easing so far this year to 135 basis points, prompting economists to question how much more easing room the RBI has.

The RBI is also facing mounting problems in the banking system, which could further hurt lending in the economy. It recently imposed withdrawal curbs on a small bank and lending restrictions on another lender. Addressing some of those worries, the RBI said earlier this week the banking system was “safe and stable.”

The central bank raised its near-term inflation forecast slightly to 3.4 per cent for the second quarter of the fiscal year started April, while projecting the headline number to continue to stay below its medium-term target of four per cent-- a level it’s been under for 13 straight months.

The core measure, which strips out volatile food and fuel prices, has been decelerating amid subdued demand.