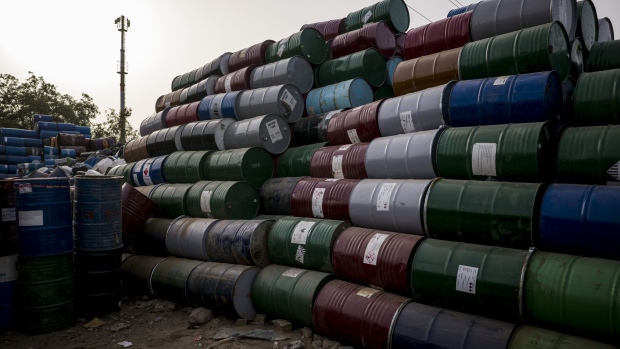 Oil barrels in Faridabad, India, on Sunday, June 12, 2022. Extreme weather conditions in some nations, combined with Russia’s invasion of Ukraine, have led to a global squeeze in supplies of fossil fuels, and sent prices of oil, natural gas and coal soaring. , Bloomberg

(Bloomberg) -- India slashed windfall taxes on locally produced crude oil, and for exported diesel and aviation turbine fuel, in line with the decline in international prices.

The tax on crude oil produced from domestic fields, introduced from July 1, was cut from Sunday by about 24% to 8,000 rupees ($98.3) a ton, according to a government notification published late Oct. 1. The government also removed a 5-rupee-per-liter levy on the export of aviation fuel and halved the tariff on diesel to 5 rupees a liter.

New Delhi, which joined a growing number of nations that imposed windfall levies to tap energy companies’ booming profits, has been adjusting the taxes about every 15 days to to track international price movements. The latest cuts will help Indian fuel exporters such as billionaire Muksh Ambani’s Reliance Industries Ltd. and oil explorer Oil & Natural Gas Corp., and will boost shipments, aiding energy-starved markets in winter as power generators turn to diesel amid surging natural gas costs.

Softening of international oil and petroleum fuel prices helps the world’s third-biggest energy consumer, which imports more than 85% of its crude requirements.

Indian Oil Corp., the nation’s largest fuel retailer, has lowered prices for aviation fuel by about 4.5% to 115,520.27 rupees every kiloliter in Delhi from Oct. 1 to pass on the benefit to consumers. It also cut prices of liquefied petroleum gas sold for commercial use by 1.4% to 1,859 rupees every bottle of 19 kilograms.