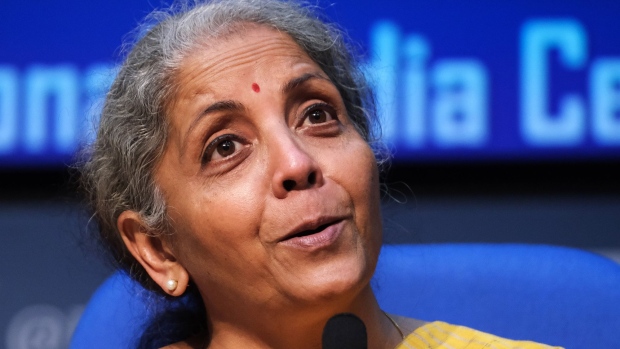 Nirmala Sitharaman, India's finance minister, speaks during a news conference in New Delhi, India, on Monday, Feb. 1, 2021. India unveiled a budget that blows out the fiscal deficit wider than expected as the government of Prime Minister Narendra Modi seeks to spend its way out of the pandemic-induced slump. , Bloomberg

(Bloomberg) -- India’s plan to sell two state-controlled lenders may get deferred to next financial year as the government is yet to seek parliament’s nod for changes in laws required to start the transaction, according to people familiar with the matter.

The Finance Ministry hasn’t finalized modalities to seek approval from lawmakers for the sale, which leaves little time for the process to be completed this year, the people said, asking not to be named as the information is not public. The government will seek buyers for two state-run banks by March 2022, Finance Minister Nirmala Sitharaman had said in February, as she outlined the nation’s budget for the current financial year that began April 1.

A spokesperson for the Finance Ministry could not be immediately reached for a comment.

India’s plan to sell a majority stake in the country’s second-biggest state refiner has also slowed down, and the transaction may only take place early next year rather than in 2021, Bloomberg News reported in July. The administration could still go ahead with other asset sales, including Life Insurance Corp. of India’s initial public offer, that could help the country’s efforts to raise funds to make up for any fall in tax revenues this year.