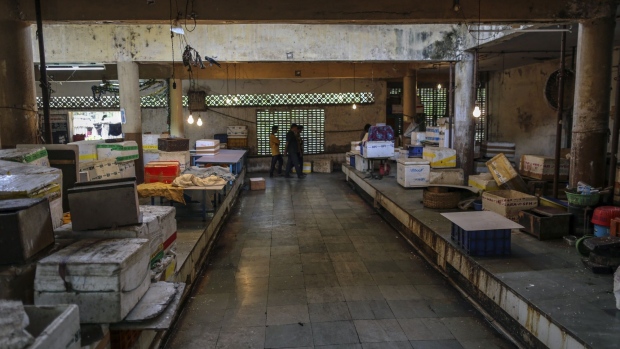 People walk through a closed meat and fish market in Mumbai, India, on Wednesday, March 25, 2020. India imposed a three-week long nationwide lockdown for its 1.3 billion people, the most far-reaching measure undertaken by any government to curb the spread of the coronavirus pandemic. Photographer: Dhiraj Singh/Bloomberg , Bloomberg

(Bloomberg) -- Indian Prime Minister Narendra Modi’s government has postponed indefinitely plans to begin surveys leading to its next census and a comprehensive population register as it grapples with the spread of coronavirus infections. The process was to have begun in April.

The population registry plan was seen as a precursor to a national citizens register that, along with a new citizenship law, had led to angry protests across India since December. Door-to-door surveys to record the census and start creating a population register were delayed keeping in mind the coronavirus outbreak, the government said in a statement on Wednesday.

India has recorded 512 cases of COVID-19 infections and nine deaths.

The delay in the exercise could help temporarily calm protests and reassure some state governments, especially states ruled by opposition parties, including Kerala and West Bengal. The two states had already halted all work related to the population register citing a possibility the data collected during the exercise could be used for a citizen’s registry. The federal government, which on Tuesday announced a 21-day national lockdown to fight the outbreak, will need to states’ cooperation to manage the pandemic.

Census data is collected once in a decade in India. The population register is to gather data that can help the government reach benefits to targeted beneficiaries. The surveys to register residents of India had been scheduled to run April through September.