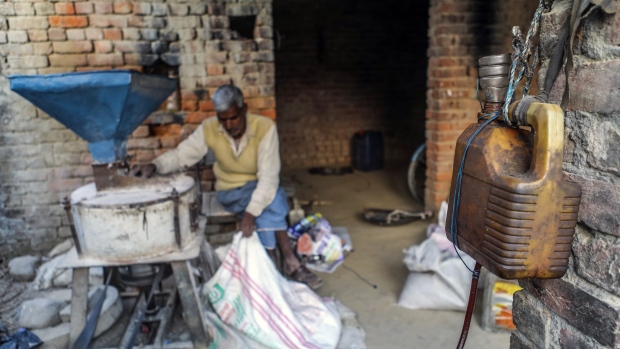 A container supplying diesel hangs from a wall as a man operates a diesel-powered wheat mill in the village of Fateh Nagla, Uttar Pradesh, India, on Saturday, Jan. 14, 2017. Indian Prime Minister Narendra Modi pledged to bring reliable power to all citizens during the campaign that propelled him into office in 2014, the same year the World Bank pegged India as home to the world's largest un-electrified population. While his government has made progress meeting its 2019 deadline, many families are still missing out, holding back some of India's poorest, most-vulnerable citizens and preventing the country from achieving its development ambitions. Photographer: Prashanth Vishwanathan/Bloomberg , Bloomberg

(Bloomberg) -- India’s diesel consumption is gathering pace with the onset of annual festivals, boosting sales to pre-pandemic levels in the first half of October in a sign that the economy is bouncing back.

The top three Indian fuel retailers sold 2.41 million tons of diesel Oct. 1-15, just 0.9% less than the corresponding period of 2019, according to preliminary figures from officials with direct knowledge of the matter. The sales were 14.5% higher than the same period a month earlier, they said, asking not to be named as the information is not public.

The nation’s month-long festival season -- typically during October and November -- is a busy time for diesel-guzzling trucks hitting the roads to deliver everything from clothes to refrigerators across the country. Reopening of schools and crop-harvesting activities will further boost the consumption of industrial fuel.

Diesel accounts for almost 40% of total oil product demand in the nation, and a rebound will boost refinery operations and crude imports by the world’s third-biggest oil consumer. The International Monetary Fund sees India’s gross domestic product expanding 9.5% in the year to March after contracting 7.3% last year.

Here’s a table of the preliminary data: