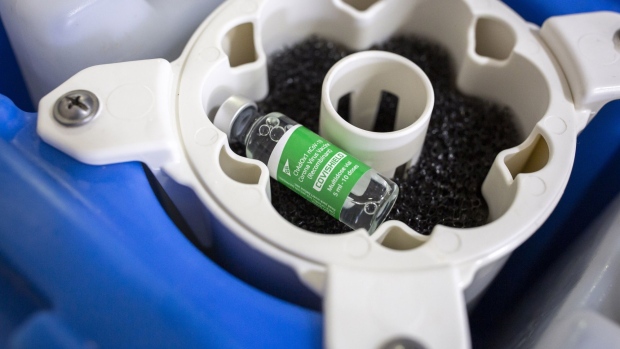 A vial of the Covishield Covid-19 vaccine, developed by AstraZeneca Plc and the University of Oxford and manufactured by Serum Institute of India Ltd., in a cold storge box at Thika Level 5 Hospital in Thika, Kenya, on Tuesday, March 30, 2021. Kenyan hospitals are grappling with record numbers of critical-care patients, stretching a system that was inadequate even before the outbreak of Covid-19. Photographer: Patrick Meinhardt/Bloomberg , Bloomberg

(Bloomberg) -- Serum Institute of India Ltd., the world’s largest vaccine maker, will deliver 220 million doses to India’s vaccine-starved federal and state governments over the next few months, which can cover 8% of the country’s population.

The Narendra Modi-led central government will receive 110 million doses of Covishield while the state governments and hospitals will receive the rest, the Pune-based manufacturer said in a statement on Twitter Monday, without specifying a definite delivery date.

“Vaccine manufacturing is a specialized process, it’s therefore not possible to ramp up production overnight,” Serum’s Chief Executive Officer Adar Poonawalla said in the statement. Producing enough doses for all adults in India, given the huge population of 1.4 billion people, is “not an easy task,” he said.

India, which saw its daily surge in new infections breach 400,000 cases on Saturday alongside steadily rising death toll, is struggling to contain the world’s fastest-growing Covid outbreak that has stretched its health care system to breaking point.

Vaccines, often cited as longer term solution to tapering the virus curve, have also been in short supply, exacerbated by the inability to build a stockpile in the early months of the year when the outbreak was ebbing and before the deadly second wave hit.

Serum has delivered more than 150 million Covid shots out of the total 260 million doses ordered so far, according to the statement which did not specify the government or agency that ordered these batches and received them.