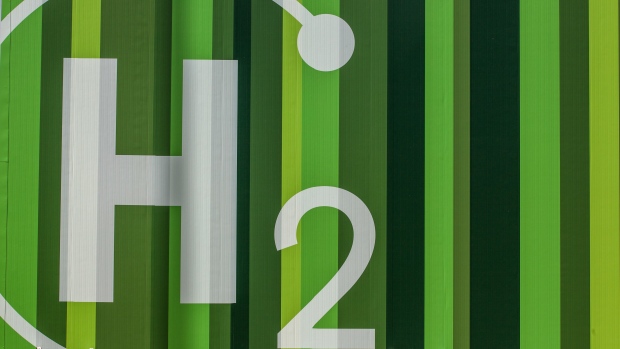 The chemical symbol for hydrogen on the exterior of the electrolyzer area during the final stages of construction at Iberdola SA's Puertollano green hydrogen plant in Puertollano, Spain, on Thursday, May 19, 2022. The new plant will be Europe's largest production site for green hydrogen for industrial use. Photographer: Angel Garcia/Bloomberg , Bloomberg

(Bloomberg) -- India plans to slash the production costs of green hydrogen to $1 a kilogram from $5-$6 currently to encourage industries to use cleaner energy and wants access to cheaper loans to hep fund that transition, a senior government official said.

The world’s third-largest carbon emitter put out a roadmap in February to become a hub for the production and export of green hydrogen -- made from water and renewable electricity, though the fuel is a long way from being commercially viable.

“Unless cheap finance is available to be able to rapidly enhance both renewable and non-renewable, this transition will be difficult to speed up for a long period of time,” said Amitabh Kant, chief executive officer of the government’s think tank Niti Aayog, in an interview with Bloomberg Television. “Finances at low costs are critical.”

India, one of the world’s biggest fossil fuel importers, is also seeking to cut its reliance on oil given its import bill is expected to almost double to $300 billion in the coming decade, Kant said.

The government is re-jigging policies after Prime Minister Narendra Modi announced plans in November to make the country a net zero carbon emitter by 2070 and 50% renewable energy user by the end of the decade.

It needs about $25 billion to create a domestic supply chain with national installed electrolyser capacity of 25 GW producing 5 MT of Green Hydrogen by 2030, according to the India Hydrogen Alliance, which counts Reliance Industries Ltd. and JSW Steel Ltd among members.

India will continue to focus on electrifying two and three-wheelers as well as public buses, Kant said. The government will not push for electrification of four wheelers in the Indian market given private sector interest, he said.

As it is, the costs of electrifying transport is expected to fall after India’s recent tender for more than 5,000 electric buses got bids at prices cheaper than diesel and combustion buses, Kant said.